Companies must disclose how much CEOs earn versus the rank and file. 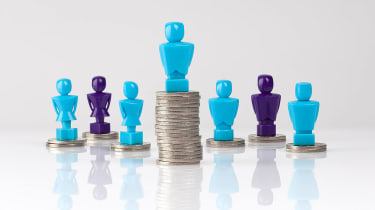 It's no secret corporate executives rake in vastly higher pay than the people who work for them. But now investors will learn exactly what the pay gulf is when they get companies' proxy statements, which are filed in advance of companies' annual meetings. New rules from the Securities and Exchange Commission require publicly traded companies to disclose the ratio of CEO pay to that of the firm's median salary. The change is required by the 2010 Dodd-Frank legislation, which was enacted in the wake of the 2008 financial crisis.

As results pour in, companies whose CEOs command astronomical pay packages are likely to make headlines, particularly because wages for average workers have been stagnant since the economic downturn ended in 2009. But critics of the rule say it's difficult to make apples-to-apples comparisons because some industries outsource low-wage work, boosting the in-house median salary, and others have a large number of part-time or foreign-based workers who receive less compensation, driving the ratio higher.

Del Monte, for instance, reported paying its CEO $8.5 million last year–more than 1,400 times the median salary among a mostly foreign-based workforce. The average ratio, according to a survey by research firm Equilar, is 140 to 1.

Investors may also question whether high executive pay translates into long-term performance. There's little evidence that it does. Investment analytics firm MSCI added up cumulative pay between 2007 and 2016 and found that the companies with lower CEO pay over the period outperformed companies with higher pay by nearly 39%, on average.