Harbor Mid Cap Value Has Faith in Its Formula

As a bull market keeps churning along, it gets harder to find cheap stocks. But the managers of Harbor Mid Cap Value (HIMVX) don’t seem to be having much trouble. Their secret: a numbers-based stock-picking system. It’s “a boring, conservative strategy,” says Josef Lakonishok, CEO of LSV Asset Management, which runs the fund. But it’s a strategy that delivers. Since the bull market began in 2009, Mid Cap Value has returned 32.4% annualized, outpacing the Russell Midcap index and 93% of its peers.

Lakonishok and two partners use computers to identify relatively cheap stocks with market values of $1 billion to $28 billion. They home in on key measures of value, such as price-earnings and price-to-cash-flow ratios. But they also want stocks that have been performing well recently. Those that score best make it into the fund. At last word, Mid Cap Value held 137 stocks.

One number the managers don’t care about is the price they paid for a stock. “We have no memory of what price we bought a company for,” says Lakonishok. And they don’t use price targets to determine when to sell a stock. Rather, they take into account the same factors they used when buying. If a stock becomes too expensive or it loses momentum, it becomes a candidate for selling. But the managers sell infrequently. The fund’s turnover ratio is 18%, implying an average holding period of almost six years. Top holdings include Ameriprise Financial and Helmerich & Payne, an energy-drilling company. 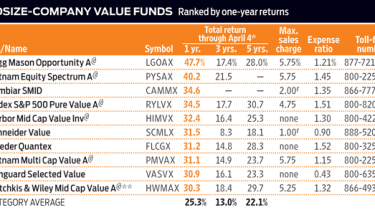