The trick to these investments is to buy in when they trade below the underlying net asset value of their holdings. 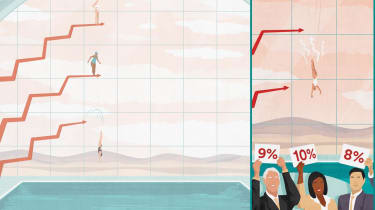 Like their ETF cousins, closed-end funds (CEFs) hold baskets of securities. And like ETFs, CEFs trade like stocks. But whereas ETFs contain mechanisms designed to keep their share prices close to the value of their underlying assets, closed-ends do not. As a result, CEF shares typically trade well below (and sometimes well above) the underlying net asset value of their holdings. Most CEFs also borrow money to buy securities.

Ideally, you should decide whether you like a CEF’s underlying investments and buy when the fund trades well below its NAV, says John Cole Scott, chief investment officer of Closed-End Fund Advisors, which specializes in CEFs.

Risks to your money. A fund’s investments could slump. The discount between a fund’s NAV and share price may widen. CEFs’ use of borrowed money, or leverage, also boosts risk. Steeper short-term rates could hurt heavily leveraged funds by raising their interest expenses and squeezing their distributions.

How to invest. We like Pimco Dynamic Credit and Mortgage Income Fund (PCI, $21, 9.2%), which keeps about two-thirds of its assets in “non-agency” mortgage securities and rounds out the portfolio with junk bonds and other kinds of debt. Non-agency securities—pools of residential mortgages that aren’t backed by government entities such as Fannie Mae—have lower credit ratings than government-guaranteed mortgage securities, but they yield more and aren’t as sensitive to rate moves. Two caveats: The fund uses a hefty amount of leverage, amounting to 46% of assets, and it trades at just 2% below NAV. “We trust Pimco with this fund,” says Scott.

Ares Dynamic Credit Allocation (ARDC, $16, 7.7%) holds about half of its assets in floating-rate loans, with the rest in junk bonds and other kinds of debt. It looks risky from a credit perspective, but the portfolio should hold up well in an expanding economy. The fund’s floating-rate loans, meanwhile, would gain value if short-term rates were to increase, making the fund a good bet now, says Scott. The shares currently trade at an 10% discount to NAV.

BlackRock Enhanced Equity Dividend (BDJ, $9, 6.6%) holds big dividend-paying stocks and sells call options against half of its portfolio to generate additional income. That strategy effectively caps the fund’s appreciation potential in a rising market, but income from the options should help mitigate losses in a downturn. In 2008, for instance, the fund declined by 17.2%—less than half the loss sustained by the S&P 500. The shares trade at a 9% discount to NAV.

Before tossing these items into your virtual shopping cart, be sure to read Amazon's return policy first.
Insurance for Long-Term Care at Home

For many investors, the short answer is no. Here’s why, and what you might consider instead.
Skip to ContentSkip to Footer