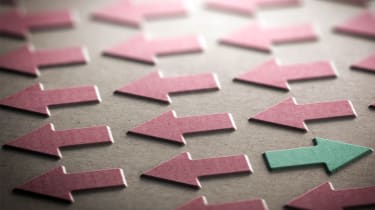 Back in 2014, Fidelity New Millennium (FMILX) fund manager John Roth described himself as an opportunistic stock picker. Now, more than nine years into a bull market, he says he’s become more of a contrarian. In mid 2017, Roth shed shares in high-flying tech stocks, including Alphabet, Apple and Facebook. In 2014 and 2015, as oil prices plunged, he loaded up on energy stocks.

That last bet paid off over the past year as oil prices rebounded. Roth’s energy stocks, which make up almost 13% of the fund’s assets (double the energy stake in Standard & Poor’s 500-stock index), helped New Millennium, a member of the Kiplinger 25, our favorite low-fee mutual funds edge the S&P 500 by one percentage point over the past 12 months. Two firms were heavy hitters: Shares in Legacy Reserves (LGCY), an exploration-and-production company, soared 378%; ConocoPhillips (COP), another E&P firm, rose 70%.

Roth’s latest contrarian move was buying shares of General Electric (GE). He was drawn to the troubled conglomerate in early 2018 after the stock had dropped nearly 60% since mid 2016 and was “left for dead” by other investors, he says. But a turnaround seems possible. After GE played “whack-a-mole” to fix its problems for years, Roth says, it hired a new chief executive last year who is committed to streamlining the business. GE recently announced plans to spin off its health care business and sell its stake in oil-services firm Baker Hughes. “They’re finally unlocking value, finally admitting the firm has to break up,” says Roth.

New Millennium gives Roth a lot of latitude. He can invest in small, medium or large companies, based in the U.S. or abroad. These days, the fund has about 14% of its assets invested overseas, mostly in the U.K. and other European countries. Roth says he’s finding good opportunities, one company at a time, in “firms that people haven’t heard of.” Shares in HUB24, an Australian financial-services firm, have risen 95% over the past 12 months. Fevertree Drinks, a U.K. beverage company, is up 110%.

Since Roth took over New Millennium in 2006, he’s had several good years and a few lackluster ones. But over the past decade, he beat the S&P 500 by an average of more than half a percentage point per year.