It’s time to look abroad—where the values are. 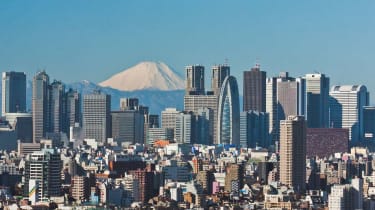 Hindsight is always 20/20. It was easy to make money in stocks over the past year. All you had to do was invest in a low-cost fund that tracks Standard & Poor’s 500-stock index and close your eyes. The large-company U.S. stocks that dominate the S&P 500 delivered solid returns, handily outpacing the shares of small companies.

The S&P 500 did even better in comparison with stocks of foreign companies, in both developed and emerging nations. Over the past 12 months, the S&P 500 returned 17.3%; the MSCI EAFE index, which tracks large companies in developed foreign markets, lost 1.8%; and the MSCI Emerging Markets index gained 7.17%. (Returns and other figures are as of January 26.)

But U.S. stocks are getting pricier at the same time traders are marking down foreign stocks, especially those in emerging nations. The S&P 500 currently trades at 19 times earnings for the previous 12 months—and valuations on the average stock are at record high levels. In contrast, the MSCI EAFE index sports a price-earnings ratio of 16, and the MSCI Emerging Markets index changes hands at a dirt-cheap P/E of just 13.

I’m not suggesting that the current P/Es are irrational. Investors aren’t stupid. The U.S. economy is growing much faster than almost any other developed economy. In the U.S., years of monetary stimulus by the Federal Reserve are paying off big-time. Consumer confidence is hitting post-recovery highs and companies are hiring—the economy created at least 200,000 jobs every month from February through December 2014. The plunge in gasoline prices is providing another shot in the arm to the economy. No one thinks the economy will continue to grow at the 5% annualized rate it did in the third quarter, but neither is it likely to sink into a recession anytime soon. As the bull market approaches its sixth birthday, the U.S. economy looks pretty healthy.

By contrast, much of the rest of the world is a mess. The eurozone was always a great idea politically—a way to tie Europe together so that it could never again erupt in a major war. Economically, though, it was a bet that countries as different as nose-to-the-grindstone Germany and the relaxed cultures of southern Europe could find a happy medium. Instead, gridlock ensued. Germany has long opposed the kind of massive bond-buying campaign that the European Central Bank unveiled on January 22 and that the Federal Reserve undertook in the U.S. Southern Europe, for its part, insists on keeping its business-unfriendly labor practices in place and, in the case of Greece, resists demands that it rein in spending, a position that is only likely to harden following the rise to power of a left-wing party in late-January elections.

Japan is borrowing at a frenetic pace to try to spur growth. But it is up against a demographic wall. The population is aging—much faster even than Europe’s—partly because of a low birth rate but more importantly because of a longtime resistance to virtually any immigration. (The U.S. may dodge the demographic bullet because it is so friendly to immigrants.)

Emerging nations, meanwhile, suffer from a host of diverse maladies. Commodity-producing countries are hurting from low oil prices, China’s growth is flagging, and bureaucracy and government meddling bedevil businesses in many nations.

But here’s the key point: There are always good, sound reasons why stocks are cheap. Successful investors buy what’s cheap anyway—unless they don’t anticipate an eventual reversal of fortunes. Why? Because reversion to the mean—the tendency of valuations to return to their long-term averages—is one of the most powerful forces in investing. Those who ignore the concept do so at their peril.

What’s even more intriguing: Foreign economies and markets are beginning to show some signs of reviving. Most important, the ECB’s new quantitative-easing program—in which it will spend $70 billion a month to buy government bonds issued by nations in Europe for at least 19 months—could have some of the same salutary effects on the eurozone that the Fed’s similar stimulus had in the U.S. Meanwhile, Japan’s leaders show no sign of taking their feet off the stimulus pedal. And although China’s growth rate is slowing, the government is taking the necessary steps to transform the economy into one that’s more consumer-focused.

Stock prices tend to move ahead of big economic developments—and here, too, the news is heartening. So far this year, the MSCI Emerging Markets index has returned 3.43%. The MSCI EAFE index gained a more modest 1.0%, and the S&P 500 is flat.

Is this the dawn of brighter days for foreign stocks, which lagged the S&P 500 in four of the past five calendar years? No one knows. But foreign and U.S. stocks tend to take turns leading the pack. From the beginning of 2010 through 2014, the S&P index returned an annualized 15.5%, foreign developed companies returned only 5.38% annualized, and emerging-markets stocks mustered just 2.1% annualized.

But from the beginning of 2000 through 2009, emerging-markets stocks returned an annualized 11.4, the EAFE index gained an annualized 2.5% and the S&P 500 lost an annualized .9%. The S&P handily beat foreign developed companies in the 1990s, and foreign stocks whipped the S&P in the 1980s.

What should you, the investor, do now? I’d put 20% to 35% of your stock money in foreign stocks—with about one-third of that in emerging nations. Consider two no-load funds in the Kip 25, Cambiar International Equity (CAMIX) and Harding Loevner Emerging Markets (HLEMX), as investing options.Diversification, after all, really does pay off. You just have to be patient.