Workers of all ages can benefit from stashing away after-tax money now in exchange for tax-free withdrawals in the future. 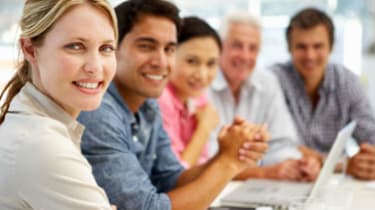 If your employer now offers a Roth option in your 401(k), it's a great idea to invest in it, or at least consider investing a portion of your 401(k) contribution in the Roth. Contributions to a Roth 401(k) won't reduce your tax bill now. While pretax salary goes into a regular 401(k), after-tax money funds the Roth. But as with Roth IRAs, withdrawals from Roth 401(k)s are tax- and penalty-free as long as you've had the account for five years and are at least 59½ when you take the money out.

Consider the benefits. Younger workers stand to gain the most from investing in a Roth 401(k) because they will enjoy many years of tax-free growth.

But older workers can benefit, too. Consider this example from Fidelity Investments: Tom and Elaine, both 45, contribute $5,000 to their 401(k) plans. Tom contributes to a traditional 401(k) plan, while Elaine contributes to a Roth. They continue to work into their seventies and don't take withdrawals until they're 75. If their tax rates and investment returns remain equal, Tom will end up with $27,404, after paying taxes on the withdrawal, while Elaine will have $38,061 tax-free (this example assumes a 7% annual rate of return and a 28% tax bracket). Even if Tom invested the $1,400 in tax savings he enjoyed by investing pretax money in the taxable account, he'd still lag Elaine by $2,616.

If you expect your tax bracket to decline when you retire, the Roth 401(k) loses some of its appeal, but it's still the superior option for many savers—even those who are close to retirement, says Stuart Ritter, financial planner for T. Rowe Price. If you take withdrawals from taxable and tax-deferred accounts and leave the money in the Roth for decades, tax-free earnings will continue to pile up.

If you plan to withdraw money from the Roth within ten years and you expect your tax bracket to drop significantly in retirement, then you might come out ahead with a traditional 401(k) plan, Ritter says. But you'd lose the flexibility to take tax-free withdrawals for major expenses, such as home repairs or medical bills. And a large withdrawal from a tax-deferred account will increase your taxable income, which could affect everything from taxes on your Social Security benefits to the size of your Medicare premiums. Those worries disappear with a Roth because withdrawals are tax-free.

Although the rules require owners to take distributions from Roth 401(k)s starting at age 70½, you can get around that by simply rolling the Roth account tax-free into a Roth IRA.

Convert your 401(k)? The law now allows employees to convert funds from a traditional 401(k) plan to a Roth 401(k), if the plan allows it. About 50% of large employers offer a Roth 401(k), according to human resources consultant Aon Hewitt. Of those employers, 27% allow in-plan conversions, and an additional 16% expect to add that option this year.