Skip to headerSkip to main contentSkip to footer
cars

Teenagers Can Be a Pain (to Insure)

A number of insurers offer discounts for good grades or completing a defensive driving course, but the price of covering teens remains high.

Sure, I knew kids were expensive: diapers, doctors, degrees. But the cost of car insurance for my new teenage driver still made my jaw drop. As a middle-aged homeowner who keeps his nose clean, my insurance coverage was like my electric bill—boring enough to be close to a fixed cost. And now I discover it’s going to cost thousands for my kid to drive herself around.

Is that worth paying to relieve Mom and Dad of some taxi duties? Surely that amount could cover a lot of rideshare trips.

Why does it cost so much to insure teens behind the wheel? Simple: They’re lousy drivers. Despite the assurances your teen may provide (“I’ve got this, okay?”), the numbers are the numbers. The crash rate per miles driven for 16- to 17-year-olds is about three times the rate for drivers 20 and older, according to data from the Insurance Institute for Highway Safety. And, sadly, that variation is true for fatal accidents as well.

The news is not all bad, though. The number of crashes and deaths among teens in car accidents has declined significantly in the past 20 years or so. A big factor in that, insurance experts say, is states’ adoption of graduated licensing laws, which restrict nighttime driving and the number and ages of passengers that can be in the car with young (or new) license holders. Another reason is that fewer teens have been learning to drive—thanks in part to an economic downturn, as well as less interest in driving, period.

Sticker shock. Unfortunately, the trend line for teen crashes has turned around and is now rising again. Exactly what that will mean for your wallet is darn hard to say. Insurance is regulated differently in each state and subject to local conditions (northern New Jersey is a whole lot different than west Texas). And your personal situation (your driving record, other coverage you may have, the cars you drive) is a big variable as well.

Even so, brace yourself. Rate analysis from Insure.com shows that adding a male teen driver to your policy raises your rate by 160%, or an average of about $2,300. For a female teen, it’s 125%, or about $1,800. “If you have a teenager who gets a ticket, or in an accident, even more so,” says Penny Gusner, Insure.com’s consumer analyst.

What can you do to mitigate that hit? Shopping around for insurance is always a good idea, as rates can vary significantly for different reasons. Because insurers will give you discounts for carrying multiple coverages from the same company, you’ll want to consider your homeowners and umbrella insurance at the same time (see How Much Umbrella Insurance Do You Need?). That isn’t easy, no matter what the TV ads might tell you, so maybe plop the kid down next to you when you do the research. Your teen will learn something about how insurance actually works and how much it costs (and maybe teach you something about managing a spreadsheet as a shared document).

Young drivers can help cut the cost, too, with their academic performance. A number of insurers offer discounts for good grades, typically defined as earning a grade point average of 3.0 or higher. Others will give modest discounts if your teen passes specific driver education programs.

And then there’s the vehicle your teen will drive. As a doting parent, you want your kid in the safest one, right? Here’s the catch: Features such as collision warning and automatic braking are fairly recent developments found on pricier cars that are more costly to insure. Unless your funds are unlimited, you’ll need to make a judgment call. Personally, I would not put a kid in a car that doesn’t have, at a minimum, stability control, which has been standard on all models since 2012. Our solution: a 15-year-old Volvo sedan (with stability control) that’s already got a blemish in every body panel.

We crunched a lot of numbers (and ran a survey) to crown top firms for their service on banking, credit cards, mortgages, and home and auto insurance.…
COVID-19 Drives Used-Car Sales Boom 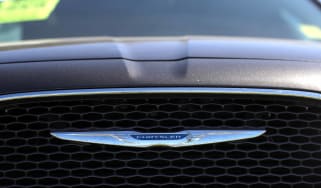