How one woman turned family recipes into a tasty profit. 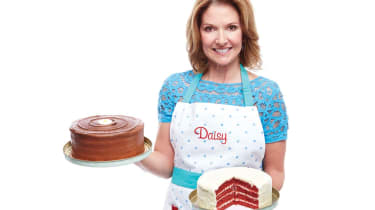 Kiplinger's spoke with Kim Adams Nelson (pictured at left), 53, founder of Daisy Cakes, a Pauline, S.C.-based bakery, about how she got her business off the ground with a little help from ABC's "Shark Tank." Read on for an excerpt from our interview:

What inspired your business? Over the years, I had catered, started a restaurant and taught cooking classes. In 2009, I was working for someone with whom I prepared and sold homemade cake mixes at Junior League fund-raising shows. I realized that people really wanted ready-made cakes, but “from scratch.”

How did you begin? The recipes came from my grandmothers and my Great-Aunt Daisy. But you can’t just multiply each ingredient by 10 to make 10 cakes, so my mother and I had to experiment. It took about 25 batches to get the carrot cake right, and probably 15 for the devil’s food. In the fall of 2009, we sold about 1,000 cakes at three Junior League shows and made $27,000 after expenses.

How did you finance the start-up? We worked in a building my dad had built for my cooking classes, where we had four stoves and four KitchenAid mixers. But we needed computers, a Web site with a shopping cart, business telephones, commercial mixers, and 150 cake pans. My parents helped with an investment of $93,000.

You appeared on the TV show Shark Tank? On Halloween 2010, I made my pitch while the sharks ate big hunks of cake. I asked for $50,000 and offered 25% ownership in the company. Shark Barbara Corcoran noticed that while the others turned me down, they kept eating and talking with their mouths full. She signed up for my offer but asked me to pay her $1 a cake until she got back the $50,000. I agreed. That episode aired on April 22, 2011, right before Mother’s Day. The response crashed our Web site and blew up our phone lines. We took more than 2,000 orders in 48 hours and spent all of May working 24 hours a day, five days a week, to fill them.

So you outsourced production? We grew too big, too fast. To meet demand, I tried three large-production bak­eries in Georgia, New York and Tennessee. But the quality suffered. Our customers demanded their money back; I sent them a new cake, too. We brought production back home, maxed out our credit cards to pay our bills and worked as many hours as we could to recover.

How’s business now? We grossed $3.15 million between 2011 and 2014. I finished paying back Barbara by the end of 2013. Last year, we sold 16,399 cakes in five varieties—red velvet, chocolate, lemon, coconut and carrot—plus a flavor of the month, at $49.95 per cake plus shipping [at www.ilovedaisycakes.com]. I’m working on a couple of gluten-free recipes now, too. The cake is frozen, wrapped and nested inside a cake tin, a Styrofoam cooler box with dry ice, and a corrugated box. We ship to all 50 states.

It’s a family affair? I have eight full-time employees, who are like family and have stuck with us. They earn $10 to $14 an hour. My mama [Geraldine Adams] is here nearly every day, doing whatever needs to be done and running circles around people half her age. My son Adam, 23, works in the office, and my son Sam, 20, does the shipping.

Do you eat your cake? In moderation. I prefer ice cream. I love ice cream!