The Long Slog in Congress After Comey

Trump's firing of the FBI director ruffled congressional feathers, but not enough to spur an independent investigation into Russian meddling in the 2016 U.S. election. 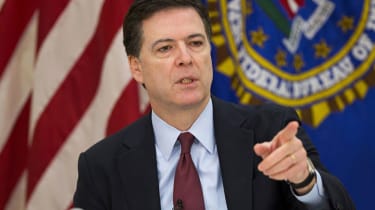 President Trump blindsided Washington once again this week, this time with his shocking firing of FBI Director James Comey. On Capitol Hill, the move infuriated Democrats and frustrated Republicans, who are growing weary of being left in the dark by a White House often disconnected from, and sometimes disdainful of, the legislative branch.

The Comey sideshow is poised to further slow a Congress already gridlocked by partisan rancor. And as it faces a full plate of major agenda items—such as a health-care overhaul, tax reform, appropriations bills and a looming debt ceiling—Republicans can ill afford another distraction.

There is little agreement among Republicans and Democrats on how to respond. And even if there were, the executive branch holds key trump cards, including the authority to name an independent special prosecutor to take over the Russia probe. Don’t hold your breath on that.

That hasn’t stopped Democrats from trying. They say the timing of the firing is highly suspicious, given that Comey was leading an investigation into whether Trump's campaign had ties to Russia's alleged meddling in the 2016 presidential election.

“We need to assure the American people that they can have confidence in our criminal justice system to conduct the Russia investigation impartially,” Schumer said. “All we are seeking is some assurance that the subject of this investigation is not able to influence it or, God forbid, quash it.”

The President Always Gets Audited. Will You?

Senate Majority Leader Mitch McConnell (R-KY) says a new investigation is a bad idea because it “could only serve to impede” ongoing Senate Intelligence Committee and FBI probes into whether Moscow influenced the November election.

“I want to make sure that whatever we do we don’t impact the Senate Intelligence Committee’s ability to move forward with their investigation,” said Sen. Jeff Flake (R-AZ). “You tend to get siloed when you have different investigations going on.”

But McConnell has stopped short of calling for a conference-wide position on the Comey affair, letting individual members address the issue as they see fit.

“Everybody’s on their own,” said Sen. Bob Corker (R-TN). “There is no policy statement that’s being put out.”

The Republican strategy, at least for now, is for members to keep their heads down, forge ahead with efforts to repeal and replace Obamacare and hope that the Comey controversy eventually blows over.

“People are wanting to let a little time go by and understand a little bit more about what all has happened,” Corker said. “Instead of making hair-on-fire statements…I think people are just sort of taking this in and hoping that somebody really great” replaces Comey.

Republicans had little sympathy for Comey, characterizing him as a highly partisan Obama appointee incapable of leading the FBI in an impartial manner. Members of both parties widely criticized Comey for his handling of an investigation into Hillary Clinton's e-mail practices.

“I think there are a lot of Americans who lost confidence in the FBI with the way that Mr. Comey handled Mrs. Clinton’s e-mail fiasco,” said Sen. John Kennedy (R-LA). “I’ve always been worried that that absence of confidence would bleed over to his investigation of the Russian influence, so I’ve always worried about the credibility.”

“He was really quite sorta outside his lanes” on the Clinton investigation, added Sen. John Thune (R-SD). “That raised questions about his ability to be effective in the job and probably…it compromised that effectiveness.”

“It is standard with a new administration that the attorney general is replaced, the U.S. attorneys are replaced, and given the cloud that carried with Director Comey, it would’ve been simpler and far cleaner for that to have been done in the opening days of the administration,” said Cruz, who opposed Trump for the 2016 GOP presidential nomination.

That’s not always the case with FBI directors. Comey’s predecessor, Robert Mueller, was appointed by President George W. Bush and stayed on the job for more than four and a half years after President Obama took office. President Carter named William Webster, who served deep into President Reagan’s second term.

Republicans accuse Democrats of trying to exploit the Comey firing, shifting the political narrative away from themselves while portraying the administration in a Nixonian hue.

“Schumer would like to have everything distracted right now and that’s why he’s going to try to keep this thing alive,” said Sen. James Inhofe (R-OK). “It’s just mindboggling because they [Democrats] are the very ones that said he should’ve been fired a long time ago.”

But numerous Republicans are also concerned about the timing.

“I’m a little confused by it,” said Sen. James Lankford (R-OK). “Why this time? Why this moment?”

And Burr, who has received bipartisan praise for his panel’s handling of the Russia probe, said he was “troubled by the timing and reasoning” of Comey’s termination.

“Director Comey has been more forthcoming with information than any FBI director I can recall in my tenure on the congressional intelligence committees,” the Republican said. “His dismissal, I believe, is a loss for the bureau and the nation.”

Burr and Warner say they are committed to continuing the panel’s probe. Late Wednesday they issued a subpoena to force former National Security Advisor Michael Flynn to hand over documents related to its investigation. Flynn refused to turn over the paperwork when the panel first asked last month.

House Republicans, whose chamber, unlike the Senate, is on a week-long break, mostly have shied away from the Comey controversy. Speaker Paul Ryan (R-WI) told Fox News the president and the Justice Department had lost confidence in Comey and suggested that the former director became a distraction for the bureau.

“What’s really important at this point now that we find a replacement very soon,” Ryan said.

The House’s own inquiry into Russian interference in the presidential election has been much rockier than the Senate’s inquiry. Last month House Intelligence Committee Chairman Devin Nunes (R-CA) temporarily stepped aside from his panel’s probe while the Ethics Committee examines whether he violated House rules.

Some Democrats suggest putting off confirming Comey’s replacement until a special prosecutor examines his firing. McConnell will have none of this; he will start the confirmation process as soon as Trump nominates a successor. And with Senate rules only requiring a simple majority to confirm presidential nominees, Democrats can’t reject anyone without Republican votes.

A career civil servant or law enforcement official, rather than a partisan one, likely will have the inside track, as he or she would be better positioned to survive the necessary confirmation vote in the Senate.

Nicole Duran and Matthew Housiaux contributed to this report.

SEE ALSO: Get Kiplinger Alerts FREE for 30 days and be among the first to know and prosper from these timely updates.