Our intrepid White House reporter tells what it’s like to travel aloft with presidents.

Here’s something they don’t tell you in journalism school: When you make it to the plum White House beat and get to ride on Air Force One, don’t stand under it for very long if you don’t have to. Why not? So you don’t risk losing your hair to the radiation emitted by the top secret technology hidden in the wings of the aircraft. 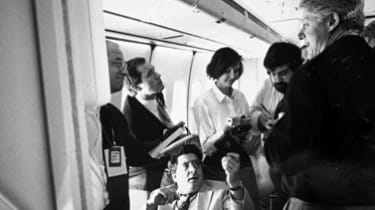 Everyone aboard gets a first-class seat (our news agencies, not the taxpayers, pay our first-class-equivalent fare), the meals hover between healthy and comfort food, and first-run movies are available on demand in every compartment. Moreover, guests who fly with the president are given souvenirs, such as boxes of M&M candy adorned with the presidential seal and signature, plus certificates documenting their travel on the plane.

As much as reporters loved to whack President Bill Clinton in the media, he loved to routinely stop by the press compartment and chat with reporters. Sometimes he would stay and chat for what seemed like the entire flight. We learned much and shared the knowledge we gained with our readers.

Clinton’s successor, George W. Bush, didn’t think much of the press corps, and neither does President Barack Obama, with both often hiding far away from inquisitive reporters.

The largest celebration that I recall aboard the plane had to be on the flight from Andrews to New York on Jan. 20, 2001, when it was no longer Air Force One. No longer president, Clinton was being flown home at the end of his second term. A special press pool was selected for the flight and I made the cut, or at least my newspaper did.

The hour-long flight from Joint Base Andrews just outside Washington, D.C., to New York City turned out to be a series of teary-eyed toasts marking the end of Clinton’s presidency. It was clear to all of us on board how much he had loved his job -- and how much Clinton loved his rides aboard Air Force One.

“The experience took on a life of its own because we worked there, we played there. We slept there,” Clinton said of the jet in the book Air Force One, written by my colleague Ken Walsh, another of the frequent fliers who have traveled aboard the world’s most famous aircraft.

Sometimes the work included having to report on less than flattering circumstances involving Air Force One. President George W. Bush’s half-hour flyover from the comfort of the plane to review the destruction wreaked by Hurricane Katrina cast him as detached from the reality of the catastrophe. Five years later, Bush would admit the error. It was not his or Air Force One’s finest moment.

And when a senior Obama administration aide ordered Air Force One to fly over the Statue of Liberty for a taxpayer-funded photo op in the spring of 2009, the stunt did more than waste tax dollars to the tune of the $178,000 or so per hour it costs to operate the plane. It scared New Yorkers who saw the low-flying plane and flashed back to the horrible morning of Sept. 11, 2001. "This [incident] was just plain stupid,” a senior White House official told me when, as the White House correspondent for the Daily News, I broke the story that the director of the White House Military Office was being fired because of the flyover debacle.