Trump can win the White House, but faces an uphill climb. 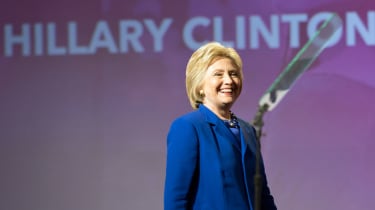 With just over two months until Election Day, the race for the White House is Democrat Hillary Clinton’s to lose.

That’s not an endorsement, just straight talk about the probable outcome of the November 8 contest, without playing favorites or telling you what editors of The Kiplinger Letter think you want to hear.

It takes 270 electoral votes to win, and Clinton is on pace for at least 291. Donald Trump will claim at least 191, with 56 up for grabs in four states that are too close to include in a forecast. But even if Trump wins all four toss-ups — Florida, North Carolina, Iowa and Nevada — he needs to take at least 23 electoral votes from Clinton to give him a narrow victory. Sweeping the toss-up states won’t be easy; he’s leading, narrowly, only in North Carolina.

Trump can still win, but he’s quickly running out of time.

To keep Democrats from winning a third straight presidential term for the first time since 1940, Trump first needs solid performances in the upcoming debates, especially the first one in late September. Debates are always vital, but this one is especially important since Trump trails Clinton by five points or so in most national polls, and because early voting will be starting in some states at about the same time that millions of Americans tune in to the face-off.

But that’s a tall order, for sure. Clinton is a seasoned debater, and Trump won’t have a TelePrompTer to help stay on script. Plus, unlike in his debates in the primary, Trump and Clinton are likely to be the only candidates on stage. Green Party candidate Jill Stein, in low single digits in most polls, has no chance of meeting the 15% threshold to be on stage, and Libertarian Gary Johnson, in high single digits, is a long shot.

Trump, of course, could also benefit from some unforeseen development — a medical scare for Clinton, perhaps, or some new hint of scandal that pushes Clinton voters toward Trump or causes them to stay home on Election Day. October surprises do happen but can’t be counted on as campaign strategy.

And Trump, of course, could just as easily be the one who stumbles, turning the race into a rout.

The map above shows where Kiplinger editors expect the states to wind up on November 8, not where they stand today. So there are some differences from current polls. Georgia, for example, is a statistical tie, but we think Trump will prevail. And Clinton has a small lead in electoral-vote-rich Florida, but we expect that gap to narrow.

Neither candidate leaves large numbers of voters with warm, fuzzy feelings. Unfavorable ratings have never been this high for both major party candidates, and many folks say their votes will be as much against one candidate as in favor of the other.

Clinton’s strongholds: The Northeast, Upper Midwest and the West Coast, with Colorado, New Mexico and Hawaii tossed in. We see Clinton prevailing in 23 states and Washington, D.C. Trump has the advantage in 23 states, mostly in the Mid-South and the West.

Even if Trump had avoided recent stumbles and had run a stronger campaign, he might still be in difficulty. Democrats hold a sizable edge over Republicans in voter registration. And, with the exception of Texas and Florida, Democrats tend to dominate bigger states with larger numbers of electoral votes.

Changes in demographics favor Democrats, too. The rising percentage of Hispanics, for instance, helps Clinton in Colorado, Arizona, Nevada and Florida. Hispanics generally tilt toward Democrats. This year, with his strong stance against illegal immigration, Trump is likely to do worse than usual with them. Plus more women than men vote in presidential elections, and they vote for Democrats in general in greater numbers than men do. So far, more women prefer Clinton.

At the moment, national polls are tightening a bit, and it wouldn’t be a surprise to see that trend continue. But this isn’t a national race, it’s a series of state races. So far, most swing states are still firmly in Clinton’s corner.

Barring some big changes, it may be a long four years for the GOP.