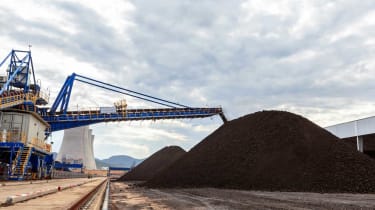 Not so long ago, the American economy practically ran on coal. In 2005, coal-fired power plants supplied half of the nation’s electricity—far more than any other energy source. But this year, the figure has dropped to 34%.

Tough air pollution rules written during Obama’s first term have shuttered dozens of coal plants that emitted too much mercury and other toxins. Taking their place? Plants that run on cleaner burning natural gas—which has become cheap and abundant, thanks to the fracking boom.

The U.S. Environmental Protection Agency is targeting coal directly now by requiring the electric industry to emit less carbon dioxide, the main greenhouse gas blamed for global warming. Coal inherently produces more CO2 per watt of electricity generated than any other fossil fuel. A mandate for less CO2 is effectively a mandate for less coal.

How much less? First, consider that power plants are already on track to burn less coal this year than at any time since the late 1980s. Then factor in the EPA’s projection that utilities will have to use about 20% less coal to meet the new CO2 limits by 2030. If the agency is right, that would reduce annual coal usage by the utility industry to about 580 million tons—still a hefty total, but a far cry from the roughly 1 billion tons the power sector burned as recently as 2011.

The cutbacks will hit coal country hard. The EPA expects coal output to fall the most in Appalachian states such as West Virginia and in Western states such as Wyoming. Coal mining states in the Midwest, such as Illinois, will see only a modest fall in demand.

Ironically, the U.S. coal industry is fading even as coal expands its global dominance. In its 2014 review of world energy usage, the energy giant BP reported that worldwide coal consumption actually rose slightly last year. And the International Energy Agency said last year that it expects global coal demand to grow by 10% over the next decade, with China eventually burning slightly more than half of all coal and India likely to surpass the U.S. as the second-biggest coal consumer.

U.S. miners might see a ray of hope in those trends. After all, falling U.S. coal demand could be offset by selling more coal overseas. But with coal prices down dramatically, shipping U.S. coal thousands of miles to Asia probably won’t be cost-effective when competitors in Australia and other coal-rich countries are located so much closer to the big sources of demand in Asia.

In fact, exports of U.S. coal are already starting to slide.

There’s no question coal will remain a source of power here in the U.S. But with domestic demand slipping and overseas markets unlikely to make up the difference, the outlook for American coal miners is grim. The pending bankruptcy of mining giant Alpha Natural Resources is unlikely to be the last stumble for an industry facing a lot of headwinds.