Bringing Back the Bees

Gardeners and others are joining a broad new effort to replenish the nation’s hard-hit bee population. 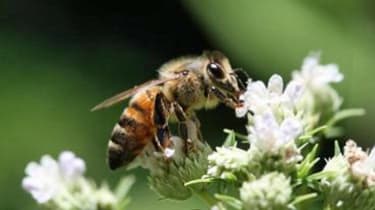 As bee populations dwindle further, to hardly more than half their numbers in the early 1970s, a new save-the-bees offensive is under way.

Bees, along with other pollinators, are critical to producing crops — apples, almonds, avocados, melons, cranberries, to name just a few — valued at $20 billion a year. But bees have been decimated in recent years by pesticides, drought, stress and varroa mites — the scourge of honeybees everywhere.

Now, beekeepers, conservationists, gardeners, and public and private agencies are joining together to bolster bee habitats and diets in hopes of making honeybees and wild bees thrive once again.

Moreover, entomologists are enlisting help from honeybees abroad to reinvigorate their cousins in North America. A team from Washington State University is impregnating queen bees in the U.S. with sperm collected from drones in Europe.

Sperm taken from an Italian strain of honeybees, which reproduce faster than most other honeybees, will benefit farmers who need as many bees as possible to pollinate their orchards. Sperm from cold-tolerant bees native to the Alps and Caucasus Mountains will help American bees avoid being decimated by late spring freezes. That hardiness will also lessen hive infestations by varroa mites — the scourge of honeybees everywhere.

Meanwhile, repopulation efforts are rapidly gaining steam at the federal and state levels as well as in the private sector.

Federal initiatives: The Department of Agriculture is making the creation of bee-friendly environments a key to obtaining contracts and cost-sharing grants under the Environmental Quality Incentives Program.

Further, 100,000 acres enrolled in Uncle Sam’s Conservation Reserve Program are now committed to favorable types of habitats for pollinators. In fact, farmers are eligible for $150 bonuses on new CRP enrollments featuring bee habitats that have been reviewed and approved by the government.

In the states: A number of initiatives are under way. A bill pending in Minnesota, for example, calls for the creation of a list of suitable plants for bee habitats and orders such vegetation to be included in the state’s conservation easements.

West Virginia’s Commissioner of Agriculture Walt Helmick has mining companies promising to start seeding bee habitat next spring on lands reclaimed from coal mining. They’ll also ensure that beekeepers have access to those lands. State road and forestry crews will place bee-friendly plants along roads and in forests. The state department of transportation, for example, will “plant clover in the I-64 right-of-way from the Kentucky line west to Huntington. That’s 20 miles of clover,” Helmick says.

The private sector: The plight of bees is garnering sympathy among growing numbers of Americans, who are planting flowers and other plants that can feed bees year-round.

There’s a huge new interest in beekeeping, too, throughout the country. Countless gardeners, farmers and others are taking up beekeeping as a hobby, helping to foster community awareness and protective attitudes toward bees.

“The best single thing that’s happened for bees is the tremendous increase in beekeeping,” says Don Hopkins, North Carolina’s apiary inspection supervisor. Membership in the Tar Heel State’s beekeepers’ association has more than doubled, to 4,000 members, in just the past two years, he says, noting that represents just a fraction of the state’s beekeepers overall.

Nationally, the American Beekeeping Federation says its membership is poised to hit 1,300, a 50% increase in four years.

Workshops on creating pollinator habitats are becoming commonplace. The Native Pollinators in Agriculture Project, an effort launched by the National Association of State Conservation Agencies, will hold a field training session in October in Massachusetts. It will focus on teaching cranberry growers and other farmers about what sorts of vegetation to plant along cranberry bogs to provide quality nutrition for bees throughout cranberry season. A similar session will be held in Michigan in December for growers in the Great Lakes region.

To further protect bees, the Environmental Protection Agency is banning the use of certain insecticides when pollinators are gathering nectar and pollen. Insecticide manufacturers have until Sept. 30 to make label changes to these pesticides, warning farmers and others of the restrictions. The pesticide makers must also inform the EPA of their pollinator stewardship plans: steps taken to ensure that farmers and other applicators avoid killing any bees.