Strong growth in health care, business services and construction are helping to tamp down new claims for unemployment benefits. 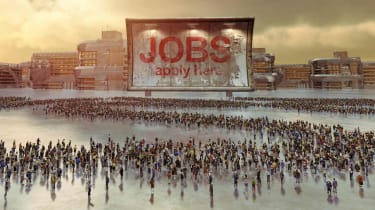 The number of first-time filers for unemployment benefits remains at multi-decade lows, the Department of Labor said Thursday. The number of newly unemployed workers for the week ended March 30 came to 258,000, a decrease of 3,000 from the previous week's unrevised level of 261,000. The 4-week moving average was 254,250. Weekly initial jobless claims are tracking at levels last seen in 1973, according to the Federal Reserve.

The continued dip in unemployment claims jibes with other readings of the Labor market. The most recent monthly payrolls report from the Labor Department revealed that most industries added jobs in February, with strong growth in health care, private education, business services, food services and construction. The mining and manufacturing sectors also strengthened. Retail showed weakness, but that followed a robust January.

The unemployment rate, which is derived from a separate survey, edged down to 4.7%. The number of long-term unemployed folks declined, and the number of those working part-time who wanted to work full-time fell as well.

Kiplinger’s economic outlook expects the job market to continue to tighten this year as demand for skilled workers exceeds their availability. Employment growth in 2017 should slow to an average of 180,000 jobs per month, from 187,000 per month in 2016, but the unemployment rate will edge down further to 4.5%. The four-week average of initial unemployment claims is still near its lowest level since 1973, limiting the additions from this source to the ranks of the unemployed.

Wage gains for nonsupervisory workers stayed at a 2.4% growth rate in January. Nonsupervisory workers comprise four-fifths of the workforce, and their wage gains are more likely to be reflected in prices and consumer spending. Adding in supervisors and executives, hourly earnings picked up to a 2.8% rate.