Jump-Start Your Career With a Franchise

A franchise is a quick way to invest in a ready-made enterprise. 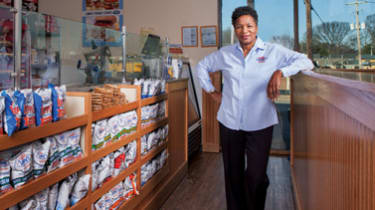 When Rowley Mayo, 62, was downsized from his job as a finance executive in 2009, he wasn’t ready to stop working. But Mayo soon learned that companies weren't lining up to hire workers in his age group, especially those accustomed to earning six-figure salaries.

Rather than accept early retirement, Mayo, who lives in Elk River, Minn., decided to start his own business. While researching opportunities, he consulted with a franchise broker who introduced him to Mr. Appliance, a home-service appliance-repair company with 148 locations in the U.S. After talking with franchise owners and company executives, he launched his franchise serving the Minneapolis suburbs in December 2010.

"I was looking for a business that was, as much as possible, recession-proof," Mayo says. Because franchisors offer extensive hand-holding, franchisees don't necessarily need expertise in the product or service they'll be selling. Mayo didn't know anything about appliance repair, but he believed that his years of management experience would enable him to find employees with the necessary technical skills. In addition, Mayo says, the $27,000 franchise fee was a bargain compared with the cost of buying the sophisticated technology needed to start an appliance-repair business from scratch. "It would cost you a fortune to duplicate what you get in a box from Mr. Appliance," he says.

For wannabe entrepreneurs, franchises offer a proven business model, says Joel Libava, a franchise consultant and author of Become a Franchise Owner! "You can get into business really fast," he says. "In a good system, mistakes have been made, kinks have been ironed out."

A typical franchise agreement gives you the right to use a franchise's name and business system for a specified period of time, which can run anywhere from five to 20 years. You may receive training, help in finding a location, management advice and ongoing support. Many franchisors also provide national advertising and marketing.

Buying an established business model doesn't come cheap. Start-up costs, which include the franchise fee, inventory, insurance and equipment, range from less than $25,000 to more than $1 million. In addition, Libava says, most franchisors require franchisees to have a net worth of at least $350,000, of which $50,000 to $60,000 must be in cash. Some well-known companies have much higher thresholds. Jiffy Lube, for example, requires franchisees to have a net worth of $450,000, of which $150,000 must be in cash. In addition, you'll probably have to fork over a percentage of your monthly gross revenue. The average royalty fee is 6.7%, according to Franchise Direct, an online directory of franchises for sale.

The bottom line, then, is that you assume most of the losses if the business flops, but you'll be required to share the rewards if it succeeds. For that reason, you shouldn't rely on the franchisor to help you decide whether the business is a good investment. A franchise broker can help you identify a franchise that fits your finances and interests. Begin your search at www.franchoice.com, or try www.franpointpartners.com, which specializes in restaurant franchises. Web sites such as www.franchise.org and www.franchisebusinessreview.com can also provide information about franchises for sale. Franchise expositions also showcase opportunities. And, check out our list of eight franchises that have reasonable start-up costs and bright futures.

Before you invest any money, conduct your own financial analysis, says Bob Papes, a small-business consultant in Henderson, N.C. Far too often, says Papes, franchise owners fail to estimate how much money they'll need to earn to cover their initial investment in franchise fees, materials, overhead, salaries and other costs. Only about half of small businesses, including franchises, survive the first five years, according to the Small Business Administration. "If you don't know your break-even point, you're probably going to be in trouble," Papes says.

Other factors to consider before buying a franchise:

The rules. In most cases, you'll have to adhere to a long list of restrictions that cover everything from the signs you post to the prices you charge. Want to offer doughnuts and coffee to the customers of your dry-cleaning business? If it's a franchise, it may not be allowed, Libava says.

Some rules have led to lawsuits. In 2009, a group of Burger King franchisees sued the company over a requirement that they sell double cheeseburgers for $1. The franchisees said the Value Menu price hurt their ability to earn a profit. That lawsuit was settled after the company adopted a new policy that gives franchisees more say in the price of items and the length of time special deals will run.

More recently, a group of Edible Arrangements franchisees sued the fruit-basket company over a series of mandates issued in 2010 that, among other things, required stores to stay open on Sundays, says Justin Klein, a lawyer representing the franchisees. The lawsuit is pending.

Karen Krieg, a personal trainer in Washington, D.C., considered buying a franchise when she decided to offer exercise classes for dogs and their owners. But Krieg wanted more flexibility than a franchise would provide. Instead, she chose a license from Thank Dog Boot Camp, a program based in Southern California. A license is similar to a franchise but is generally less restrictive. For $13,000, Krieg received training, marketing and support, but she's free to change the workout program and adjust the hours and pricing.

The competition. When reviewing a franchise contract, make sure the franchisor won't sell another franchise across the street (the contract should tell you how much of your territory is protected). But that's just the first step. You should also analyze the competition from other businesses offering a similar service, Papes says. Are you going up against a major chain with national advertising? If so, what can you offer to give yourself a competitive edge?

Mayo says his analysis of the Minneapolis area found that the appliance-repair business was dominated by giant retailer Sears and independent repairmen who worked out of their pickup trucks. Mayo believed that there was a niche between those two extremes that Mr. Appliance could fill. So far, his bet has paid off: Sales have grown from $143,000 in 2011 to $325,000 last year. He employs three technicians and is hoping to add a fourth this spring.

Edith Kelly-Green, who owns ten Lenny's Sub Shops in Memphis and Oxford, Miss., says she knew when she started in 2005 that her business would have to compete with other sandwich shops, some on the same block. Kelly-Green, who retired from Federal Express in 2003, says her stores stand out because they offer larger sandwiches than her competitors. She also works hard to provide a welcoming environment. "The key is customer service," she says.

The market. Stephen Endrizzi's decision to buy a ComForcare Senior Services franchise, which primarily provides in-home care for seniors, was partly driven by demographics. In Dakota County, Minn., where Endrizzi lives, seniors age 65 and older are expected to make up 20% of the population by 2020, he says. Endrizzi, 66, a retired industrial sales executive, started the business in May 2012 and now has 15 part-time employees. Endrizzi used a 401(k) rollover to get his franchise off the ground. (See how to finance a franchise.)

The obesity epidemic influenced Frank Gilanelli's decision to buy a Smoothie King franchise. The retired marketing executive learned about the franchise from his adult son, who spends a lot of time at the gym and likes to buy smoothies after his workouts. "The number-one topic covered by the news media is health," he says. "We're not selling something that's going to clog your arteries."

Gilanelli, whose son manages the business, opened his first Smoothie King in mid 2011 in a strip mall in Cinnaminson, N.J. He's planning to open another store in downtown Philadelphia this summer. Gilanelli used a home-equity line of credit to pay the costs of his first Smoothie King, which he says solidified his family's commitment to making the business a success. If the business fails, he says, "we'll be getting out sleeping bags and sleeping in the park."

Your research. Thanks to the rapid growth of Web sites that rate and analyze franchises, it's a lot easier to focus your search than it was even a decade ago, says Eric Stites, chief executive officer of Franchise Business Review, a market-research firm. An Internet search can also alert you to lawsuits and complaints about a franchisor.

Once you've narrowed your choices, talk to as many franchisees as you can. The franchisor you're considering will give you some names, but you should also interview some you find on your own. Talk to franchisees who are working in markets similar to yours. If the business is a restaurant or store, spend the day there; if it's a service, ask the franchisee if you can ride along for a day or two. Look for franchise owners who have been in business for at least two years, Stites says, because by that time, the initial excitement of starting a business has usually worn off.

Franchisors are required to provide prospective franchisees with a disclosure document, typically the Uniform Franchise Offering Circular. A Federal Trade Commission rule that took effect last year also requires franchisors to disclose, among other things, any legal action taken against the company over the past ten years and to provide contact information for at least ten franchisees. It's a good idea to have a lawyer who is familiar with franchise agreements review the document. Likewise, an accountant can help you determine whether the franchise is a good investment, Klein says.

When talking to franchisees, ask whether the information provided in the franchisor's disclosure document is accurate, Klein says. You should also ask them about the franchisor's customer service. "If you have a delivery that doesn't come through, what do they do?" he says. "These are things that you're not necessarily going to learn from talking to a franchisor."

This ex-baseball player is using his background to bring understanding and advocate for change.
Answers to PPP Loan FAQs (Now That There's Fresh Funding for the Loans)

Small business owners are getting another crack at Paycheck Protection Program loans. Here are answers to some frequently asked questions about the lo…
8 Tips and Warnings on PPP Loan Forgiveness

Not having to pay back Paycheck Protection Program loans is a huge benefit for small-business owners. But there are a lot of rules that must be follow…
Skip to ContentSkip to Footer