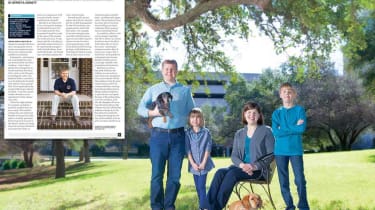 Josh Andrews was a 32-year-old Air Force fighter pilot when he appeared in our December 2008 issue. After eight years of frequent moves plus deployments away from his wife and 2-year-old son, he was thinking about leaving active duty. He was also concerned about his investments. The stock market had just collapsed, and some of the funds in his Roth IRA had lost 46%. Our “portfolio doctor,” Jeff Kosnett, recommended that he stay the course and continue to invest for the long term.

Soon after he appeared in Kiplinger’s, Josh moved to Creech Air Force Base, in Las Vegas, was promoted to major and started preparing for the transition to civilian life. He decided not to become a civilian airline pilot. “We wanted something where I could be home at night, help the kids with their homework and put them to bed on a consistent basis,” he says. (He and his wife, Kelli, now have two children, Eli, 10, and Lily, 6.)

Josh often helped members of his squadron with their financial questions, and while on active duty he used the military’s tuition assistance program to start taking classes toward a master’s degree in financial planning. He also started to build a transition fund, which eventually held eight months’ worth of income to help cover expenses after he left the military. He needed to find a job in a new line of work as well as replace valuable military benefits, such as health care and a tax-free housing allowance.

He also joined the Air Force Reserves. “I wanted to leave active duty for my family, but I didn’t feel like I was done with my military service,” he says. “You still miss the camaraderie and serving your nation.” His reserve duty will also help with his long-term plans; if he stays long enough, he’ll receive a military pension and retiree health benefits.

Now that the Andrews family has lived in the same city for a record six years, they’ve felt settled enough to get a second dog—a Labrador-beagle mix that Kelli is training to be a therapy dog. Meanwhile, their investments have continued to grow. “Jeff’s advice to stay in the market was timely,” says Josh. “When everything was tanking, I stayed the course and had a long time to go. Everything rebounded, and I was better for it. Getting that advice was reassuring.”

Work remotely – really remotely – in these appealing destinations offering special visas for American workers.
A Step-by-Step Guide to Being an Estate Executor

Despite the tensions brought on by the pandemic, a number of couples are waiting right now, with good reason.
Skip to ContentSkip to Footer