10 Things Boomers Must Know About RMDs From IRAs

Members of the Woodstock Generation are increasingly reaching the age at which “the establishment” demands they start unwinding their traditional IRAs and employer-sponsored retirement plans such as 401(k)s.

Members of the Woodstock Generation are increasingly reaching the age at which “the establishment” demands they start unwinding their traditional IRAs and employer-sponsored retirement plans such as 401(k)s. When you reach age 70 ½ -- and by our reckoning about 3.5 million Americans did so in 2017 -- you need to know the ins and outs of required minimum distributions (RMDs). If your parents or grandparents are the ones moving into RMD-land, do them a favor and share this slide show with them.

If your 70th birthday falls between January 1 and June 30, you'll turn 70 1/2 in that same year and must take your first required distribution from your traditional IRAs. If your birthday is July 1 or later, your first RMD will come in the following year. Generally, you must take RMDs by December 31, but first-timers can wait to take their initial payout until as late as April 1 of the following year. So if you reached 70 1/2 in 2017, you can postpone your first withdrawal until 2018. But doing so means you'll have to take two distributions that year. Be sure to check whether that could push you into a higher tax bracket, cause more of your Social Security benefits to be taxed or subject you to the Medicare high-income surcharge a couple of years later. With tax reform coming, though, there’s a good chance delaying your first RMD could pay off handsomely if you’re in a lower tax bracket next year.

Note: The RMD rules do not apply to original owners of Roth IRAs. Because the government doesn't get to tax Roth withdrawals, it doesn't care whether you ever withdraw your money (although your heirs must take withdrawals).

Pinpoint How Much You Must Withdraw 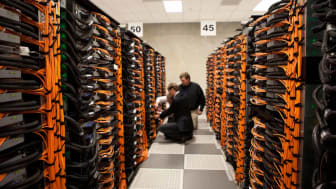 You don't need a computer or a degree in accounting to figure out how much you must withdraw from your IRAs. For 2017 RMDs, first find the 2016 year-end balance of every traditional IRA you own. Second, add them together. Third, divide the total by a factor provided by the IRS that's based on your age and life expectancy. For most IRA owners, the divisor for the year they turn 70 ½ is 27.4. So, for example, if your IRAs held a total of $500,000 at the end of 2016, your RMD for 2017 is $18,248. (If you don't want to do the math, use our RMD calculator. IRA sponsors will be happy to help, too.) An IRA owner whose spouse is more than 10 years younger and the sole beneficiary of the account uses a different, larger factor, which will lead to a lower required payout. You'll find the right number in Table II of IRS Publication 590-B. (Remember, you can always take more than the minimum.)

Once you know how much you must withdraw from your IRAs, you can choose which accounts to tap. You can withdraw the total RMD from a single IRA or spread the withdrawal over several.

Reaching age 70 1/2 also triggers required distributions for most 401(k) owners. But the rules aren't exactly the same as for IRAs. First, if you have more than one workplace retirement plan, you must figure the RMD for each account (based on the same life-expectancy factor that applies to IRAs), then withdraw separate RMDs from each account. You can't pick and choose which account to tap, as you can with IRAs. If you're still working at 70 1/2 (and you don't own 5% or more of the company), you can delay your first RMD until the year you stop working.

You Don't Have to Take Cash

Most RMDs are taken in cash, but they don't have to be. If you own stock or mutual fund shares you'd like to hold on to, for example, you can have the shares transferred to a taxable account. As long as the value of this in-kind distribution equals your RMD, you'll be square with the IRS. You'll owe tax on the distribution, just as if you had withdrawn cash. Your tax basis in the transferred securities -- the amount you'll use to determine the gain or loss when you ultimately sell them -- will be the market value on the date of the transfer. An in-kind distribution might make sense if, say, you own shares that have fallen in value but that you expect to recover. If you keep the shares in the IRA, any increase in value will be taxed in your top tax bracket when you ultimately pull the money out of the IRA. But if you move the shares to a taxable account and hold them for more than a year, any post-transfer appreciation will be treated as a tax-favored long-term capital gain, with a tax rate as low as 0%, depending on your other income. 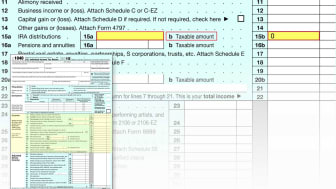 Most payouts from traditional IRAs are fully taxed in the year you withdraw them. But it's clear from the tax form that that's not always the case. If you have ever made a nondeductible contribution to your IRA, then part of every withdrawal will be tax-free. That's the good news. The bad news is that it's up to you -- not the IRS or the IRA sponsor -- to know what's what. You should have filed a Form 8606 with your tax return for each year you made a nondeductible contribution, and the most recent version should show the total of all your nondeductible contributions (minus any part that has been withdrawn). That amount is your basis in your IRA, and you need to figure the ratio of the basis to the total in all your traditional IRAs. If your basis is 5% of the total, for example, 5% of your withdrawal will be tax-free.

You Can Have Taxes Withheld ... or Not 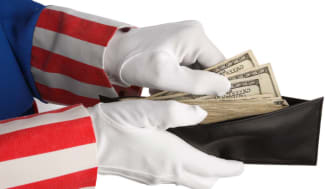 As a general rule, an IRA sponsor will withhold 10% of your payout as taxes to be sent to the IRS. But, unlike tax withholding on wages, this payment is completely voluntary. If you want to block withholding -- or have more than 10% withheld -- simply tell your IRA sponsor at the time you request the distribution. Withholding tax on your RMD may simplify your life if it permits you to avoid making quarterly estimated tax payments during the year. Some IRA owners, in fact, use large withholdings from late-in-the-year RMDs to cover their tax bill on both the IRA payout and investment earnings. Such withholding can protect you from an underpayment penalty because withholding is considered paid evenly through the year, even if it comes in late December. If you are withdrawing your RMD via monthly or quarterly payments from the IRA, you may need to file a Form W-4P with the sponsor to either block withholding or determine the amount to be withheld. If your state has an income tax, be sure to check on your state's rules about tax withholding on IRA payouts.

The Penalty for Messing Up Is Severe, But It Can Be Waived

One of our tax laws' most draconian penalties is reserved for those who fail to take as much out of their IRAs as the RMD rules demand. The penalty is equal to 50% of the amount you failed to withdraw. It's as though Uncle Sam were saying that if you don't want the money he will be happy to take it off your hands. If you miss the RMD deadline, though, don't automatically send a check to the IRS. The agency can -- and often does -- waive the penalty for taxpayers who have a good excuse, such as getting lousy advice from a tax preparer or IRA sponsor, say, or becoming seriously ill just before year-end when you had planned to make the required withdrawal. If you think you have a good excuse, in fact, the IRS will review your case before making you pay the penalty. First, though, get the required amount out of your IRA as soon as possible, to show good faith. Then, figure the penalty on Form 5329, but don't send a check. Instead, attach a statement to the form explaining why you failed to meet the deadline. If the IRS agrees that your request for a waiver is reasonable, you're okay. Otherwise, you'll get a bill.

You Can Always Have More

Remember, the M in RMD stands for minimum. You can always take more out of your IRA than the RMD demands (although you're probably best off leaving the money in the tax shelter until you need it). And there is no requirement that you spend the money once it comes out of the account. You have to pay tax on the distribution, yes, but you can immediately reinvest it using a taxable account.

You Can't Roll Over an RMD

Don’t even think about rolling over your RMD to another IRA. The whole point of forcing you to take withdrawals is to get the money out of the tax shelter—so the IRS gets to tax the payout and any future earnings on it. In fact, the first money out of your IRAs each year after you reach age 70 ½ is considered by the IRS to be your RMD.

You Can Give It Away

Congress has finally made permanent a rule that allows taxpayers over age 70 ½ to donate up to $100,000 from their IRAs directly to charity. And, the gift can count as your RMD. Although taxpayers who itemize could take their RMD, donate the cash to charity and claim a tax deduction to offset the income, the direct-donation strategy has advantages. First, it keeps the distribution out of your taxable income in the first place, so it’s a real benefit to those who don’t itemize. And, it can save money for itemizers because an IRA payout that doesn’t show up on the tax return can’t increase your adjusted gross income. Some tax breaks are scaled back as AGI rises, and AGI also controls how much of your Social Security benefits are taxed and whether you’re subject to the high-income surcharge on Medicare premiums.

Have you been tempted to join the wave of folks jumping on the Roth IRA conversion bandwagon? First, check out the pros and cons to see if it makes se…
Election 2020: Joe Biden's Tax Plans