The technological revolution in modern warfare isn't just about airborne drones silently scouting the battlefield from 30,000 feet. We’ve already looked at some developments in the works, but more technologies are on the way from the Pentagon’s Defense Advanced Research Projects Agency (DARPA), working with defense contractors and other private companies. Though some of these blueprints look like they’re right out of a futuristic summer blockbuster movie, most are just a few years away from deployment. Some have the potential to save combat soldiers’ lives. They all will change the face of war. Take a look:

This rugged transporter would take off like a helicopter and fly like a cargo plane. When they land, some versions under study by Lockheed Martin, United Technologies and Textron would even be able to drive off like, well, a Humvee. The concept vehicle, dubbed the ARES, would be similar to a small version of a V-22 Osprey transport, which already provides the Army and Marines with a huge operational advantage in difficult terrains. One of its most promising capabilities: quickly moving soldiers and gear over minefields and past roadside booby traps without having to call in a bomb squad first. The military wants the air-to-land vehicle to be extremely rugged, utilitarian in design, easy to operate and simple to fix.

Imagine off-road dirt bike engines that make no sound. They would be powered by tough, powerful battery packs, allowing warriors to sneak up quickly on an unsuspecting enemy. Such designs are in the works at Logos Technologies and electric bike maker BRD. The electric two-wheelers would have just a small reserve of gasoline in case of an electric failure, plus a secondary fuel source, if needed, to escape danger.

Lasers on the High Seas

Easier to turn, aim and fire than today’s heavy shipboard antiaircraft weaponry, laser guns will give sailors a more precise bead on the enemy. So precise, in fact, that naval vessels will be able to zap and disable an approaching enemy boat’s engine, allowing sailors to capture and interrogate their combatants rather than killing or wounding them. This technology will be especially useful in close-to-shore patrols, where ships are more vulnerable to attacks from small boats. Several companies are involved in building the so-called Laser Weapons System, including Raytheon and San Diego-based defense contractor Kratos. It will be tested soon aboard the USS Ponce, one of the workhorses of the U.S. Atlantic Fleet.

Early research is promising for development of medical “nanobots” that could be introduced into a soldier’s bloodstream or tissues, capable of releasing treatments for everything from a sore throat to malaria or maybe even the effects of chemical or biological weapons The nanobots, part of an area of research called In Vivo Nanoplatforms, would work at the molecular level, hitching rides on a natural protein in the body. One day they might save the lives of soldiers where combat medicine or medevac services are lacking, and they could eventually find their way into civilian applications, too.

Using electromagnetic energy instead of gunpowder or other combustible fuel, this rail gun fires 23-pound shells a distance of 100 miles or more at seven times the speed of sound — Mach 7. The Navy expects to conduct seaside trials in 2016, after more limited testing in defense labs. A rail gun projectile will cost as little as $25,000 — far less than the current cost of an attack missile, $500,000 to $1.5 million. And one warship could hold hundreds of projectiles. Multiple rail gun shells could also be fired in sequence to blow apart incoming missiles.

Unmanned seacraft, ranging in size from a Jet Ski up to a small yacht, will be joining the Naval arsenal in the coming years. Operated remotely, they’ll be used to patrol coastlines or perform mine sweeps. Some vessels could be equipped with weapons. This all may sound like a simpler proposition than airborne drones; not so. Unmanned surface boats have to negotiate currents, riptides, debris, other boats and even cope with the occasional rogue wave. Plus the elaborate electronic components need to stand up to corrosive saltwater conditions. 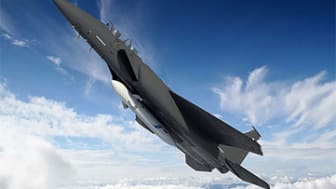 The Air Force and Boeing are working on a device that can launch satellites from airborne vehicles more quickly and cheaply than via a conventional rocket launch. The way it works now, small spy and defense-related satellites often piggyback on larger spacebound payloads blasting off from the ground. This complicated process can cost tens, even hundreds of millions of dollars. Instead, a special high-altitude jet would be used to vault satellites into orbit, using a small rocket attached to the wing or underbelly of the jet. Cost estimates then drop to around $1 million per launch. As satellites get smaller and more powerful, this type of launch will gain popularity with the military, which wants the option to deploy satellites quickly and anywhere.

War Room on a Table Screen

A portable device will allow commanders to visualize the battlefield using holography and interactive maps — no 3-D glasses needed. The Urban Photonic Sandtable Display condenses the giant war room screen that’s become a movie cliché to the size of a dinner table. Zebra Imaging of Austin, Texas, is a leader in the development field and has been working on 3-D military maps of varying sophistication for several years. Possibilities for commercial applications are many, including uses for engineering and architecture.

Troops one day will receive vital, real-time cues about their location, surrounding terrain, danger zones and much more with “augmented reality” holographic glasses. Called ULTRA-Vis, the transparent eye screen covers one eye and provides visual pop-ups keyed to a wearer’s exact location, plus directional signs and alerts to enemy locations. Yes, it’s like Google Glass, but featuring a mini war room map with sensors and live data. Applied Research Associates in Arlington, Virginia, and Britain’s BAE Systems are developing the eyewear with DARPA. As the technology is refined, future applications could easily be found for police, firefighters and even commercial pilots.