Do you really need to tip the barista? Your Uber driver? A bad waiter or waitress? 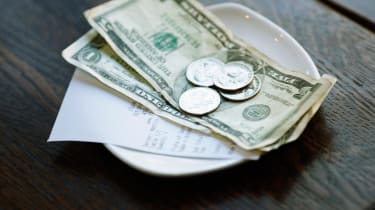 Tipping a restaurant server or cabbie goes without saying. But when it comes to a barista or Uber driver, the ex­pectations are not so clear. Here’s how to navigate new tipping practices.

When I swipe my card to pay for my latte, the payment screen prompts me for a tip. Am I obligated to give one? Once, cafés and carry-out joints simply left a tip jar next to the cash register. Now your receipt may include a line for gratuities­—or a digital payment screen may have preset tip options for your order. Manually entering your own tip amount takes time. Hitting “no tip” in front of the cashier makes you look cheap.

Nevertheless, gratuities are not necessary in venues without sit-down service (including those where you pay up front and someone brings you your food), says Daniel Post Senning, spokesman for the Emily Post Institute, so don’t feel guilty about pressing “no” or drawing a line through the extra space on your receipt. When the counter staff go out of their way to accommodate your requests, however, tipping is a way to show thanks.

Do I tip my Uber driver as I would a regular taxi driver? Tipping on Uber rides is a murky issue. Contrary to some assumptions, a tip isn’t factored into your fare (the only exception is uberTaxi). However, the company states on its Web site that you don’t need to tip. And because the fare is automatically charged to the credit card you have on file, you can’t add a tip via the Uber app. (Uber’s competitor, Lyft, does allow riders to tip through its app.)

So are you off the hook with Uber drivers? Yes and no. “Tipping is not a rock-solid social expectation, as in a restaurant,” says Post Senning. At the same time, drivers are free to accept gratuities. (It’s another misconception that Uber doesn’t permit them to.) If you have cash and want to show your appreciation to the driver for, say, efficiently navigating a complicated route, offer the same 15% to 20% you’d pay for a regular cab ride.

Whether or not you tip, be sure to reward a good driver by leaving a positive rating and feedback after you get dropped off, says Thomas P. Farley, of What Manners Most, an etiquette consultancy.

A restaurant added an automatic 18% service charge to my group’s check, but the service was terrible. Should we have paid it? More restaurants are charging a mandatory service fee. If you experienced very poor service, speak with the manager and see what remedy he or she suggests or, if you feel a smaller gratuity is appropriate, determine an amount you think is fair and ask the manager to redo the bill. However abysmal the service, though, don’t stiff your waiter, because you never know what behind-the-scenes factors affected how you were treated.