Best Things to Wait Until Black Friday to Buy

You'll find the best prices on these seven items during what's traditionally the biggest sale of the year. 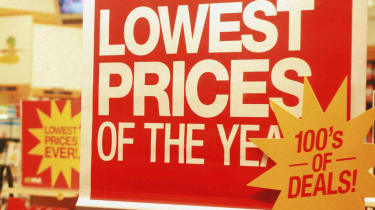 There are plenty of good reasons to start your holiday shopping before Black Friday, the day after Thanksgiving when retailers have big sales in stores and online. For starters you can help your budget by spreading out your spending over several weeks or months. You can also get hot items before they sell out, and you can avoid the crowds. (See 5 Reasons Not to Wait Until Black Friday to Shop for more.)

But there’s good reason Black Friday is so popular among bargain hunters: deep discounts on a variety of items. Here are seven things you should wait until Black Friday to buy -- or Thanksgiving day, which is when many Black Friday sales now start -- to get the best price.

Cookware. You’ll find a plethora of deals on pots, pans and kitchen accessories during Black Friday sales. Typically, you can find discounts of up to 70%, says Offers.com Vice President Howard Schaffer. Some of the best sales on cookware this year will be at Amazon.com, Kohl’s and Walmart, according to DealNews.com.

HDTVs. Black Friday is known for TV deals. Be aware, though, that the deepest discounts are on lower-end HDTVs. So if you’re more concerned about price than quality, you can get up early and battle the crowds to try to snag a doorbuster deal on an off-brand HDTV. You’ll see plenty of low prices on brand-name HDTVs, too, during sales over the long Thanksgiving weekend, says Brent Shelton of cash-back shopping site FatWallet. Just don’t expect prices on quality sets to go as low as they will on off-brand TVs.

New tablets. You’ll find plenty of deals on older-model tablets now, but discounts on recently released models won’t appear until Black Friday, Shelton says. Staples, Best Buy and MacMall.com likely will mark down the iPad Air 2, according to DealNews.com. And Target and Walmart likely will bundle the iPad Air 2 with gift cards from their stores. The Microsoft Surface Pro 3 also should drop in price by about 12% on Black Friday, according to DealNews.com. Amazon’s Fire tablets likely won’t be discounted until Cyber Monday, the Monday after Thanksgiving when online retailers have sales.

Small appliances. You’ll find lots of great deals on small kitchen appliances, such as coffee makers, mixers and more, during Black Friday sales, says Scott Kluth, CEO of CouponCabin.com. For example, a KitchenAid standing mixer that regularly sold for $299 was marked down to $119 last Black Friday, he said. Keurig coffee brewing systems likely will be marked down 30% to 40%, he says. If you don’t find the kitchen gadget you’re looking for on Black Friday, DealNews.com recommends looking for a deal online on Cyber Monday.

Video games and consoles. You may find some discounts on gaming consoles now. But you’ll get a better deal if you wait until Thanksgiving and Black Friday, when retailers will bundle Xbox One and PlayStation 4 systems with some of the hottest games at the same price that they’re offering on just the consoles now, Shelton says. You’ll also find the best prices on consoles without bundles on Thanksgiving and Black Friday, according to DealNews.com. Popular games will be discounted 25% to 35%, and games for older-model consoles could be marked down as much as 60%, according to DealNews.com.

Wearable technology. There likely will be great deals on new fitness bands, smart watches and other wearable technology during Thanksgiving and Black Friday sales, says Mike Spankie, director of merchandising for Deals2Buy.com. However, Kluth of CouponCabin.com cautions that you might have to work hard (i.e. get up early and stand in a long line) to take advantage of these deals. If you don’t have to have the latest model, you should be able to find last year’s fitness band models at rock-bottom prices, he says.