Super low prices on a wide variety of products plus free shipping with no strings attached make Target a can’t-miss retailer on Black Friday. 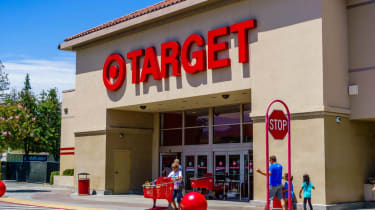 Calling all Target shoppers! The big-box retailer will be offering deep discounts on some of the season’s most coveted items -- from air fryers to Chromebooks -- as part of its Black Friday sale. For shoppers who are also Red Card holders, you’ll get early access to select doorbusters online starting on Wednesday, November 27. You’ll also get an additional 5% off on your purchases.

For in-store shoppers, locations open at 5 p.m. local time on Thanksgiving Day and will close at 1 a.m. Stores will reopen again on Black Friday (November 29) at 7 a.m. But if you don’t want to deal with huge in-store crowds and prefer to shop online, you’re in luck. There will be free shipping on all Target.com purchases through December 21.

Amazon Echo Dot (3rd Generation). Amazon.com isn’t the only place to score the e-commerce giant’s smart home devices. In fact, Target is working hard this holiday shopping season to price-match some of Amazon’s most popular items including the Echo Dot, says BradsDeals.com’s Runyan. The big-box retailer will be selling the smart speaker for $22 on Black Friday. That’s marked down from $49.99 and on par with Amazon’s holiday sale price. An added bonus: If you purchase the Echo Dot using your Target Red Card, you’ll get an additional 5% discount on your purchase.

Apple 10.2-Inch iPad (7th Generation). Holiday shoppers on the hunt for the latest Apple products at discounted prices should put Target on their list of retailers to shop on Black Friday. Several hot-ticket items from the tech giant will be marked down including Apple’s 10.2-inch iPad, says Retail Me Not’s Skirboll. The seventh generation model will be on sale for $249.99. That’s $80 cheaper than Apple’s asking price of $329.

Beats Solo3 Wireless Headphones. Wireless headphones continue to be a coveted gift. Beats was once the go-to wireless headphones brand and as a result came with a hefty price tag. However, over the years other quality brands have crept up forcing prices to drop on some Beats products -- especially during special sales events, suggests Cheapism.com’s Latham. On Black Friday, Target shoppers can score a pair of the brand’s Solo3 wireless headphones for the doorbuster price of $129.99 (originally $299.99). That’s about 60% off the retail price.

Elements 65-Inch Roku 4K UHD HDR Smart TV. The big-box retailer will be offering several noteworthy TV deals on Black Friday. However, it’s the rock-bottom price of $279.99 on this 65-inch version that makes it a top pick for shoppers on the hunt for electronics bargains, says TrueTrae.com’s Bodge. An added bonus: The TV set comes with integrated Roku technology, which eliminates having to buy a separate device to stream your television shows and movies.

HP 11.6-Inch Chromebook. Casual computer users or parent with school-age children who surf the web will likely benefit most from this $99 HP Chromebook doorbuster deal (marked down from $199.99), Latham says. CNet.com’s review mentions that it’s best for those who do mostly web-based work. The laptop comes with 4GB memory, has a quick start-up time, built-in security software and up to 11 hours of battery life. Here’s the best part: It’s made by a name-brand tech manufacturer, Latham notes. Unlike off-brand electronics that often have spotty quality, you shouldn’t have to worry about needing to replace this Chromebook in a year’s time.

Samsung Galaxy S10, S10+ or S10 Note. If you’ve been holding off on upgrading your current smartphone in hopes of scoring a Black Friday deal, you’re in luck. Target will have a couple of smartphone deals, but this Samsung doorbuster stands out because it comes with a $400 store gift card, Skirboll says. Keep in mind that you’ll need to activate the phone with a Verizon or AT&T phone plan on-site in order to get the gift card. If you happen to return the phone before the promotional period has ended (November 28 through December 1), the gift card will be deactivated.

Tranquility 12-lbs. Weighted Blanket. In the home goods category, weighted blankets are very trendy and sure to once again be a breakout holiday hit, Runyan says. They came onto many consumers’ radar last year, but were pricey because a limited amount of retailers carried them, she notes. For the 2019 holiday shopping season, more retailers have hopped on the bandwagon -- including Target -- by offering budget-friendly versions just in time for the holiday gift-giving season. You can buy the Tranquility blanket for $30 at the big-box retailer and save $19 off the original price.

Ninja Foodi TenderCrisp. Foodies, this doorbuster deal is for you. That’s because it’s the best of both worlds -- a pressure cooker and an air fryer all-in-one. Both have been individual best sellers among small kitchen appliances for the past few years, Latham adds. This Ninja Foodi TenderCrisp will be on sale for $169.99 as part of Target’s Black Friday doorbusters. That’s about 30% off the original price of $229.99.

Soda Stream Fizzi Sparkling Water Maker. If you’re constantly stocking up on sparkling water or club soda when you go grocery shopping, it might be time to invest in a sparkling water maker of your own. It can help cut down on your grocery bill over time. Consider treating yourself to this Soda Stream Fizzi Sparkling Water Maker this holiday season, Skirboll recommends. It will be 45% off at Target selling for $49.99 (normally $89.99).

Hatchimals HatchiBabies. These plush interactive toys are all the rage with the kindergarten set. You can score one for your favorite five-year-old for $29.99. That’s 50% off the original retail price of $59.99. Hatchimals are wildly popular this time of year and tend to sell out quickly when prices drop, Skirboll says. This is definitely a deal you want to scoop up immediately if you’ve got a little one on your holiday shopping list who expects the toy to be under the tree, she advises. However, if you aren’t in a hurry prices and availability can be even better after the holidays when demand wanes and retailers try to clear out leftover toy inventory.