What We Learned From Mom and Dad About Money

Don't underestimate the influence you have on children when it comes to finances. 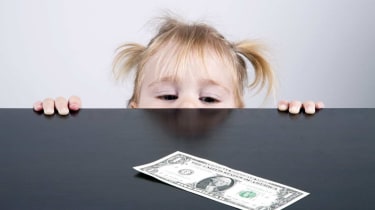 In my June column on how not to spoil your grandchildren, I wrote about my friend Laura Vault, who makes her grandchildren save 10% of all the money gifts she gives them. Laura shared a follow-up anecdote about her grandson, William, who’s 6. When William’s mother asked him to put money in the collection plate at church, he balked. “Nana told me to save my money,” he said.

Which just goes to show that parents (and grandparents) really do have power. That’s the first of eight guidelines in our story on how to raise money smart kids. As part of the story, I asked my Kiplinger colleagues to ask their children, What was the best money advice you ever got from your parents? The answers were enlightening, especially because as parents we often underestimate the influence we have on our children.

Copy editor Denise Mitchell’s daughter, Katie, 23, is a good example of guideline number two, about sticking to the basics. Katie says she always uses her mother’s trick to help her figure a 20% tip, by moving the decimal point to the left and multiplying by two. Katie’s friends are surprised that she can calculate a tip so easily.

Several responses followed guideline number three, matching lessons to your child’s age. Online editor Cameron Huddleston recalls that she and her husband taught daughter Maya to stash coins in a piggy bank from the time she was young. Now 10, Maya says she’s “learned that it’s better to save than spend so you can buy the things you really need or want.”

At the other end of the age spectrum, managing editor Barbara Marcus’s son Sam, 29, says the best advice Mom ever gave him was to pay off the larger of his two student loans. “It felt liberating to see a very large chunk of debt vanish,” says Sam.

In the same vein, senior editor Jane Clark’s daughter, Devon Madison, 26, appreciates that her mother advised her to buy a Honda instead of a more expensive Prius—especially now that she’s decided she doesn’t need a car.

Hands-on experience. Having money of their own to manage (rule number four) was cited by a couple of Kip kids. Contributing editor Kathy Kristof’s daughter, Samantha Magnuson, 25, says that getting an allowance that required her to pay for just about everything was “a really important way to learn about managing cost-of-living expenses against frivolous ones. Since I had to pay, even for gas, I had to think more carefully about whether it was worth eating out.”

My son Peter, 26, thought it was “cool” that his father would deposit a lump sum into his bank account once each semester to use for basic college expenses, such as rent and utilities. “Seeing how much I had in my bank account in December compared with August made my expenses more real than if Dad had just paid everything without involving me,” says Peter.

Staff writer Miriam Cross, 28, contributed her own recollection: “I follow my mom’s advice to sleep on a decision to see if I still want to make a purchase the next day. This has saved me from many pointless purchases.”

Finally, Anne Kates Smith’s son, Nick, 22, tells how important it is to set a good example (rule number eight): “Through your actions, you taught me that I would need to work for my money, decide what I wanted to spend it on and what I could live without. What I remember most is you teaching by example, which is probably the sneakiest and most effective way to reach a kid.”