Secrets of the Millionaire Next Door

Join the ranks of the invisible rich by building wealth the right way. 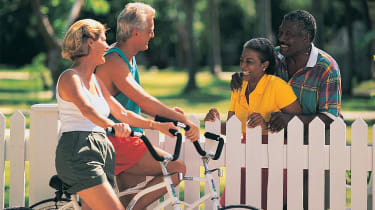 Ever have one of those situations where you find out your brown-bagging coworker has a house at the beach? Or that the unassuming guy who sings next to you in the church choir made a five-figure donation to the symphony?

You must be in the presence of what we like to call the "invisible rich." So, how do they do it? Sure, money like that can come from an inheritance or some other break, but more often than not, it’s the result of diligence, smart choices and, well, deferred gratification.

The tenets followed by these secret millionaires next door can also put you on the path to financial prosperity. Let's look at some of them.

Number 1: They don’t spend beyond their means

Yes, this is obvious, but it’s ignored as often as it’s repeated. This is what makes the invisible rich, well, invisible: They’re not conspicuous about their consumption. They’re value shoppers, whether it’s for a car or college or anything else. And they’ll buy used, putting items to use for as long as they still do the job. Meanwhile, they put the money they saved instead of buying shiny new objects to work earning interest and dividends. (Read 7 Best Things to Buy at Dollar Stores.)

Number 2: They don't swing for the fences

Just as the invisible rich take a pass on flashy things, they keep things simple when investing, avoiding more exotic options such as structured notes and hedge funds, even when their higher net worth opens the door to such investments. That’s not just because of the risk of losing principal; it’s also because of the fees that complex investments often bring with them. That’s money you’re guaranteed to lose, and money that won’t be around to grow your wealth over the long term. (Read 8 Steps to Be a Better investor.)

Number 3: They keep themselves covered

I'm talking about insurance here. It doesn’t do you much good to diligently work at getting rich slowly only to lose it all to illness, disability or someone tripping over the rosebushes at the end of your front walk. (Read 10 Insurance Mistakes to Avoid.)

Read 10 Reasons You Will Never Be a Millionaire for more lessons about The Invisible Rich.

Workers have more options with flexible spending accounts, too.
Resources for alternative forms of transportation needed by many older adults

For many older adults, having an alternative mode of transportation may be the difference between independence and social isolation.
Find the Best Money Market for You
money market accounts

Whether you choose a money market fund or account largely depends on the money's purpose.
Check Your Financial Adviser Now (and Every Year) or Regret It Later

Fewer than 10% of investors use free background checks like Investor.gov, BrokerCheck or IAPD to check their financial advisers’ backgrounds. These on…
Skip to ContentSkip to Footer