My monthly cost to watch television dropped from $112 to $20 with this new alternative to cable. 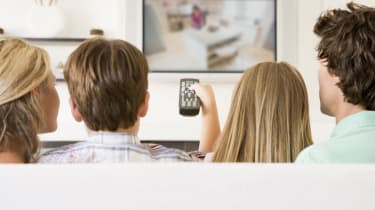 My family has had an off-and-on relationship with cable TV for years. We cut the cord, only to return when there is a big sporting event that my husband wants to watch that isn’t broadcast on channels we can pick up with an antenna.

The most recent time we ditched cable was when we moved out to the country, where satellite TV was the only option. We signed up and stuck with our satellite service for two years until this January, when we decided to cut that cord because we realized we were paying way too much for something we weren’t using that often. Our timing couldn’t have been better.

As fate would have it satellite TV provider Dish Network in January launched Sling TV, an Internet-only service that lets you watch several live TV channels that are staples of basic cable packages for just $20 a month. So we decided to try it.

Easy to install. To watch Sling on an Apple or Android device, you just have to download the Sling TV app. To watch it on your television set, you need a compatible streaming device such as Roku or Amazon Fire TV. (Sling TV will be available through Xbox and Nexus Player soon.) We took advantage of an offer from Sling to get 50% off a Roku 3. Once it arrived, we connected it to our TV, opened an account with Sling and added the Sling TV “channel” to our Roku in a matter of minutes. No waiting around for hours for a cable guy to show up and connect us.

It offers channels we like. Like many consumers, one of the main things I disliked about cable and satellite TV was that we were paying for a lot of channels we never watched. Sling’s “Best of Live TV” package includes ESPN, ESPN2, AMC, IFC, TNT, TBS, Food Network, HGTV, Travel Channel, Adult Swim, Cartoon Network, Disney Channel, ABC Family, CNN, El Rey and Galavision. Many of these channels were among the few we actually watched when we had cable and satellite TV. You also can subscribe to additional packages of kids, news and sports channels for $5 a month per package. However, for hard-core cable TV junkies, Sling’s 16 basic channels plus the add-ons still might not be enough. But it’s worth noting that the devices on which you can currently stream Sling TV – Amazon Fire TV and Roku – allow you to stream additional channels such as A&E, CBS News, History and PBS Kids for free.

It's live TV. You can watch previously aired episodes of TV shows through services such as Netflix (starting at $7.99 a month), Amazon Instant Video (included in a $99-a-year Amazon Prime membership, which works out to $8.25 a month) and Hulu Plus ($7.99 a month). But if you don't like waiting to see your favorite shows, you can watch them live when they air on Sling TV, as long as your favorite shows are on the channels offered by Sling.

It offers movies. You can stream movies on-demand via multiple services for $2.99 and up. So if you’ve cobbled together a cable-like experience using some combination of Netflix, Amazon Instant Video, Hulu Plus or pay-per-purchase services such as Vudu, you might find that you can watch all the movies and TV series you want with just Sling TV. Or you can combine it with some of those services for more viewing options and likely still pay less per month than you would for cable TV.

There’s no contract. Unlike some bundle agreements with cable or satellite TV that can lock you in to a service for a year or two, you can ditch Sling at any time.

There are ads. As with any live TV, Sling has ads – and you can’t fast-forward through them.

There’s no DVR capability. You can’t record shows when they air to watch them at a later time. However, Sling does have a replay option that allows you to watch shows that have aired within the past three days.

You can only watch Sling on one TV or device at a time. This might be a deal-breaker for many families whose members watch different shows simultaneously on TV sets, PCs and other devices throughout the house. In other words, if Mom wants to watch HGTV in the bedroom and the kids want to watch Disney in the family room, Sling won’t run in both locations.

Bottom line: My family doesn’t watch a lot of TV, so Sling meets our needs at a fraction of the cost of cable or satellite TV. By making the switch, we’re saving $92 a month.

For many older adults, having an alternative mode of transportation may be the difference between independence and social isolation.
Find the Best Money Market for You
money market accounts