Portland, Maine: A Great Place to Retire for Your Health 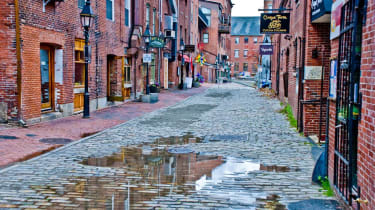 Located on a small peninsula in the Casco Bay, Portland offers city amenities with a small-town feel, says Harold Pachios, an 82-year-old lawyer who has lived in Portland most of his life. And while he can see the city changing right outside his office window, with new construction and cranes clouding his view, he says Portland is still safe and easy to get around. It’s one of 10 small or midsize cities we found that offer first-class health care.

The Old Port area offers a blend of history and practicality, with a mixture of boutiques and restaurants on cobblestone streets that run down to a working waterfront. The Portland Museum of Art and Maine College of Art anchor the arts district, along with other galleries that are within walking distance.

“There’s always something interesting going on at the art college,” says Barbara DeSerres, 68. She and her husband, Kip, 70, moved to Portland from central Maine four years ago because they wanted to live near a walkable downtown and a hospital with an emergency room.

Maine Medical Center, which belongs to the MaineHealth network, boasts more than 600 beds. Mercy Hospital has 230 beds in three locations. At Mercy’s State Street and Fore River locations, all rooms are private. Services and specialties at both hospitals range from comprehensive cancer treatment to cardiac care to orthopedics.

Karen Jones, president of the Greater Portland Board of Realtors, says retirees who want to live close to downtown can expect to pay $600,000 or more for a newer luxury condo. Units in older buildings range from $350,000 to $500,000. If you’d rather rent, two-bedroom condos close to downtown go for about $2,600 a month.

Maine taxes are a mixed bag for retirees. Residents can deduct up to $10,000 in pension and retirement-account income from state taxes. But singles with taxable income of more than $50,000 and couples with income exceeding $100,100 pay the top tax rate of 7.15%.

Portland winters can be harsh, but for retirees seeking a break from the snow, Portland International Jetport is 15 minutes from downtown.