Mesa, Ariz.: A Great Place to Retire for Your Health

This Arizona city has plenty of places to play golf (and more) and a range of health care options. 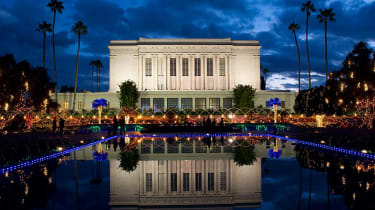 Arizona is known for its sunshine and golf courses, and Mesa has plenty of both. But the city has much more to attract retirees, such as its proximity to top-rated hospitals, a cost of living that’s lower than the national average and a range of activities for lovers of nature, sports and the arts. It’s one of 10 small or midsize cities we found that offer first-class health care.

What $300,000 will buy: 3-bedroom, 2-bath single-level house with a large master suite with its own exit to the pool

Golfers can choose from more than 200 courses in the metro area. And the weather is favorable most of the year for many other outdoor activities, such as camping, biking, fishing at nearby Saguaro and Canyon lakes, and hiking.

Retirees Bob and Marquetta White (age 67 and 66) hit the trails at least weekly, with some of their favorite hikes at nearby Usery Mountain Park and Superstition Mountains. “That’s what’s nice about Arizona. It’s really flat except when you get to the mountains,” Marquetta says. “Then you can see forever.”

Those who prefer spectator sports won’t be disappointed. During spring training every February and March, baseball fans can check out the prospects of the Chicago Cubs at Mesa’s Sloan Park and the Oakland Athletics at Hohokam Stadium. Mesa’s downtown is anchored by the Mesa Arts Center, with four performance theaters, a contemporary art museum and about 1,000 art classes a year.

You can drive through Mesa and quickly find yourself in Phoenix or Scottsdale without noticing you’ve crossed city limits. Some locals say they like the ease with which they can get to other cities’ attractions, such as high-end shopping in Scottsdale to the north or college sports at Arizona State University in Tempe to the west.

Mesa also has many 55-plus communities, says real estate agent Irene Hammond. One of the nation’s fastest-growing communities—for all ages—is Eastmark in southeast Mesa. One section, called Encore at Eastmark, is designed for adults age 55 and older, with the base price of single-family homes ranging from about $265,000 to $479,000. Retirees seeking to rent can find two-bedroom condos near downtown Mesa for $1,100 to $3,000 a month.

Kiplinger gives Arizona a mixed grade on taxes for retirees. Social Security benefits aren’t taxed, but withdrawals from 401(k)s and IRAs are—although at a low rate.