Wise Moves for a Year With No RMDs

&lt;p&gt;The chance to skip a required minimum distribution in 2009 may open up other opportunities.&lt;/p&gt;

EDITOR'S NOTE: This article was originally published in the February 2009 issue of Kiplinger's Retirement Report. To subscribe, click here.For older IRA owners, it's one of the year-end rites. Before they can ring in a new year, seniors who are 70 1/2 or older must take federally required minimum distributions from their IRAs, 401(k)s and other defined-contribution plans. But in 2009, these seniors get a reprieve.

In December, Congress voted for a one-year waiver on RMDs. It decided against waiving distributions for 2008, to the chagrin of retirees who were forced to take RMDs that were based on end-of-2007 account balances, before the markets tanked. Those who turned 70 1/2 in 2008 still had to take their first distribution by April 1, 2009, based on the account balance on December 31, 2007.

Take a hard look at your investment and tax picture to determine the impact the waiver could have on your financial situation. It could be a good time to sell appreciated assets or convert to a Roth IRA. "The waiver will open the door for a lot of good planning opportunities," says Greg Womack, a certified financial planner in Edmond, Okla.

Come 2010, you're back on the RMD hook, with a withdrawal that will be based on your account balance on December 31, 2009. IRA owners turning 70 1/2 in 2009 can skip what would have been their first distribution, but they will have to take a distribution by year-end 2010.

Heirs of retirement plans also benefit. Beneficiaries who are taking minimum distributions over their own life expectancy can waive a withdrawal for '09. Heirs who are in the midst of a five-year mandatory distribution period now get six years.

Strategies for a Non-RMD Year

James Sullivan, 86, of Paoli, Pa., says he will make full use of the waiver for 2009. "I don't need the money," says Sullivan, a retired civil engineer. "I'd rather have it sit there and grow." He says the value of his IRAs fell by more than a third. "I expected to leave the money for the children," says Sullivan, who can live off his pension. The loss, he says, "has really damaged their income down the line."

If you can forgo an RMD in 2009, you could give your investments extra tax-deferred time to recoup some losses. If you must tap your IRA, consider stretching distributions over the year. "You can take out money for 2009 on an as-needed basis," says Dick O'Donnell, senior tax analyst at Thomson Reuters, a business-information group. That way, you leave as much as possible in the account to benefit from growth during the year.

Any money you do take from your IRA in '09 is still subject to ordinary-income tax. "It's taxable income whether it's coming out to satisfy an RMD or not," says Jeremy Welther, a senior financial adviser for Brinton Eaton Wealth Advisors, in Madison, N.J.

Beyond delaying the tax bill on this year's distribution, skipping the RMD could put you in a lower tax bracket. If you can drop to the 10% or 15% brackets, you could be eligible for the 0% long-term capital-gains rate, which is good through 2010. If you qualify, consider selling investments from a taxable account this year and leaving your IRA alone.

If you don't have an RMD tax bill, it could be a good time to deal with a tax bill on other assets. "By not taking the RMD, that allows retirees to do other things," Womack says. For example, he notes that one of his clients wants to exercise stock options, which will be taxed at the ordinary-income tax rate.

Or, if you make less than $100,000 this year, you might convert part of your traditional IRA to a Roth, perhaps an amount equivalent to what would have been your distribution. "You would have paid tax anyway if you had to take the RMD," Welther says.

Dean Orton, 75, of Salem, Ore., will start gradually converting his IRA to a Roth this year. After being forced to withdraw money from a deflated IRA, the retiree says one reason he's switching to a Roth is to "have the option to take the money, or not, when I want to, without penalty."

Between the SECURE Act and the CARES Act, the landscape has changed for RMDs this year. You don’t need to take one, for instance. And if you already h…
Retirees Get Another Break with Expansion of RMD Waiver

Americans are facing a long list of tax changes for the 2020 tax year...and it's never too early to start thinking about next year's return.
Why 2020 Is an 'Unprecedented Opportunity' for a Roth IRA Conversion 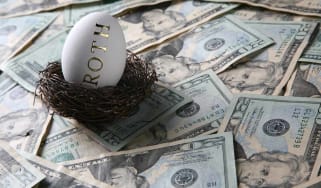 Why 2020 Is an 'Unprecedented Opportunity' for a Roth IRA Conversion

Tax advisors say you can reduce your tax bill by 30% to 40% in this unprecedented time.
Skip to ContentSkip to Footer