Discover the Secrets of Super Agers

Diet, exercise, a positive attitude and strong friendships are the keys to health and longevity. 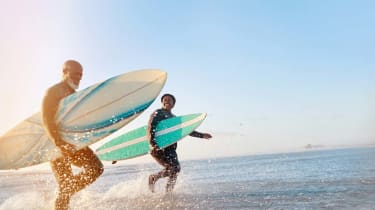 If you're reading this while pedaling a stationary bike, sipping a blueberry smoothie and chatting with your gym buddies, congratulations: You just might become a “super ager.”

Super agers are seniors who have cognitive abilities comparable to people decades younger. And a growing body of research suggests that we can all boost our odds of joining their ranks by tweaking our daily habits and rethinking our views on aging.

Physical exercise, intellectual challenges, strong friendships and a healthy diet can all help protect an aging brain, studies show. But it’s not just about crossword puzzles and leafy greens: Personal beliefs about aging play a role, too. Do you view the aging process as fixed and inevitable, or do you believe that everyone ages differently—and that your own aging process could be quite positive? Those who view aging as fixed tend to perform poorly on memory tests when confronted with negative age stereotypes, while those with more flexible views perform better, according to David Weiss of the University of Leipzig, whose research focuses on psychology and aging.

It’s important to “become aware of the power of our attitudes and beliefs,” Weiss says. “Our mindsets have a strong impact on how we are aging.”

The new studies on super agers present an alternative narrative at a time when so much news about the aging brain is negative. Nearly six million Americans are living with Alzheimer’s, according to the Alzheimer’s Association, and that number is expected to jump to nearly 14 million by 2050.

Super agers tend to share a number of traits that we can all seek to emulate. They’re generally active and engaged, whether through work, volunteering or socializing, and they’re resilient in the face of setbacks. “These individuals didn’t necessarily have easy lives,” says Emily Rogalski, associate professor at Northwestern University’s Feinberg School of Medicine. But they “tend to do a very good job of finding the silver lining.”

Keys to Thrive as You Age

Strong friendships may be key to protecting the brain in later life. “Different neurotransmitters are released when we feel compassion, empathy, love and friendship,” Rogalski says. Chronic stress, meanwhile, can negatively affect parts of the brain important for memory. Simply calling up a friend, she says, may be good for your brain.

Physical exercise is also critical. People who do more aerobic exercise, such as walking and biking, tend to have better memory and problem-solving skills and lower rates of dementia, says Art Kramer, professor of neuroscience and psychology at Northeastern University. “You can walk, ride your bike, go to a gym, play a sport,” Kramer says. “Just do something, and lots of positive things can happen.”

The brain needs exercise, too. The type of exercise doesn’t much matter, Rogalski says, so long as it interests and challenges you. If you hate crossword puzzles, perhaps you could take a photography course or learn to play an instrument. “Our brain likes to be challenged, and that’s what helps strengthen connections between brain cells,” she says.

And if all this sounds like a tough slog, remember the power of simply adjusting your mindset. “It doesn’t feel good to say, ‘I’ve passed the best years of my life,’ ” Rogalski says. “If instead you said, ‘there is this opportunity to age well, and I’m going to choose that path,’ starting with the positive attitude wouldn’t hurt.”