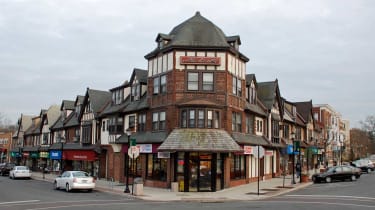 College perk: Residents have access to all of Swarthmore College’s libraries with a local library card.

When Linton Stables, 67, first moved to the tiny borough of Swarthmore, he was a tad wary. “I’ll be honest: I’m a city person, and this is a suburb,” says Stables, a former New York City architect who retired in 2014. But it didn’t take him long to warm up to this college town. Five years later, he’s president of the Swarthmore Senior Citizen Association and has a half-acre of land to garden. “It’s a bucolic, pretty town,” he says.

It doesn’t hurt that for all of its small-town charm, Swarthmore is a 20-minute train ride to Philadelphia, where you can take in museums, theater and every kind of cuisine. The train goes to Philly’s 30th Street Station, and from there, New York City and Washington, D.C., are less than two hours away by train (in opposite directions).

The town itself is walkable, with plenty of sidewalks and more than two dozen lushly forested trails. “You can’t live anywhere in Swarthmore that’s more than a 10-minute walk to town,” says Carrie Piccard, a local real estate agent since 2003. Add in free public transit for seniors, and “having a car just isn’t a necessity,” says mayor Marty Spiegel.

Swarthmore College, one of the nation’s leading liberal arts colleges, occupies about a third of the town, and with more than 4,000 different kinds of plants stretching across 300 acres, it’s also a designated arboretum. The school has long welcomed town residents by making virtually all of its happenings—concerts, lectures, sporting events and more—open to the public.

Stables says the local retirement community—a mix of longtime residents and recent settlers—is an active one. The seniors’ association has frequent meetups and is a nexus for volunteering. Retirees can spend time helping maintain the campus’s arboretum, working for the library and tutoring at local schools. Plus, the senior association has an Aging-in-Place Committee dedicated to making sure Swarthmore’s seniors have all the resources they need, in addition to advocating for the city’s buildings and downtown to become more accessible.

Because of its small size, the housing market can be tight, but residents say the situation is improving. Housing ranges from spacious, gracious old homes for $500,000 and up to condos and town houses in the $120,000 to $220,000 range. Swarthmore’s city government recently lifted a zoning law that prevented more than a few unrelated people from living together in a family home—originally intended to prevent a dozen students from cramming into a house. “That means more of us can do the Golden Girls thing and live with our friends,” Stables says. Although the town itself lacks major medical facilities, some of the best hospitals in the world, including the four-star Penn Presbyterian Medical Center, are located a half an hour away in Philadelphia.

For population figures, we used the most recent U.S. Census Bureau data. Cost-of-living data comes from the Council for Community and Economic Research (100 represents the national median). Median home prices were provided by Redfin, Zillow and local associations of Realtors.

There's Medicare Part A, Part B, Part D, medigap plans, Medicare Advantage plans and so on. We sort out the confusion about signing up for Medicare --…
Skip to ContentSkip to Footer