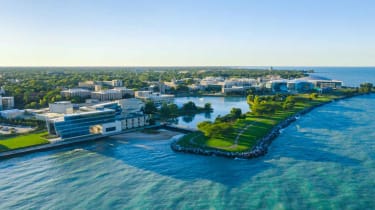 Situated between Chicago’s city limits and its North Shore suburbs, Evanston is best known as the home of Northwestern University, but it’s hardly a simple college town. Whether you’re drawn to its classes, architecture, theater or music, this “City of Churches” is a rich cultural center with plenty to offer retirees.

Evanston is on America’s so-called Third Coast, Lake Michigan. The freshwater behemoth offers excellent views and miles of biking trails along the water and through town. You can even become a member of Northwestern’s Sailing Center, which offers discounted rentals and training classes to members interesting in sailing and kayaking.

But the cornerstone of Evanston’s retiree appeal is Northwestern itself. The Osher Lifelong Learning Institute—motto: “Curiosity Never Retires”—offers regular lectures, classes and study groups for any retiree looking for a sense of community and vibrant discourse. Membership starts at $400 for a full academic year. A plethora of events is offered to the public, including seminars, movies, student and professional theater—with instruction from the artists behind Chicago’s iconic Steppenwolf and Goodman theaters—and affordable performances by the Northwestern University Symphony Orchestra. “If you’re among the people of Evanston, we do everything we can to make our community relations as good as they can be and share whatever we can,” says Bob Rowley, assistant vice president of media relations for Northwestern.

Another draw is Evanston’s historic architecture. It received the attention of architectural greats such as Frank Lloyd Wright in the early 20th century, which earned it the moniker “City of Homes.” There are dozens of iconic structures, such as the Charles A. Brown House, dotting neighborhoods across town.

The City of Homes isn’t cheap. Single-family houses go for $500,000 and up. But Evanston has plenty of condos, many ranging in price from about $200,000 to $300,000. If you’d prefer to rent until you determine whether you are game for Chicago winters, apartments are available for $1,500 a month and up.

With highly rated hospitals scattered across Chicago, including the NorthShore University HealthSystem Evanston Hospital, located in town, and the trailblazing Rush University Medical Center, you will have no problem finding world-class medical care. Illinois excludes most retirement income from state taxes, but sales taxes are steep. Property taxes are also high, but there are numerous homestead exemptions for seniors who qualify.

For population figures, we used the most recent U.S. Census Bureau data. Cost-of-living data comes from the Council for Community and Economic Research (100 represents the national median). Median home prices were provided by Redfin, Zillow and local associations of Realtors.