This town offers retirees city living that's not too far from the great outdoors. 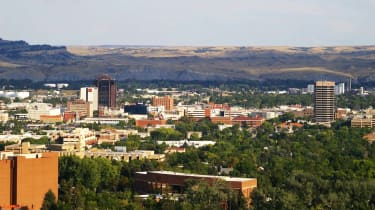 Billings attracts retirees who enjoy the great outdoors but like their urban amenities, too. You can spend the morning hiking or mountain biking on nearby Phipps Park Trail or Swords Park Trail and be back in town by noon for a burger and a beer at Montana Brewing Company. During baseball season, you can spend the evening at Dehler Park rooting for the Billings Mustangs, a farm team for the Cincinnati Reds. Billings is in the midst of a decade-long project to connect a series of trails in and around the city. People often use the trails to bike to work, says Ed Ulledalen, a financial adviser for Raymond James and former deputy mayor.

Although outsiders often associate Montana with fierce winters, locals say it doesn't get nearly as cold in Billings as it does in other parts of the state. Because the city lies in a valley, temperatures are usually moderate, says Michael Mace, 65, a retired business executive. "I can remember one Christmas break when I went fly fishing one day, snow skiing the next day and played golf the following day," he says.

Isolation is a potential downside to Billings. Flying in and out of Billings Logan International Airport is expensive, and Denver, the closest major metro­politan area, is more than seven hours away by car. You won't have to travel to find good health care, though. St. Vincent Healthcare provides specialty services in heart and vas­cular disease, oncology, orthopedics, and neurology, among others. The Billings Clinic, which has a 304-bed hospital and offers more than 50 specialties, is a member of the Mayo Clinic Care Network.

Many single-family homes in the Central-Terry and North Park neighborhoods, which are close to downtown Billings, are available for less than $200,000.

Montana has no sales tax, and residents don't have to worry about estate taxes, either. However, the state taxes most forms of retirement income at rates of up to 6.9%.

Chances are good that you will have to leave the workforce earlier than you had planned. Will you be ready?
Searching for the Perfect Place to Retire

We home in on two places with less traffic and lower costs.
10 IRS Audit Red Flags for Retirees

Watch out: These things can increase the chances that the IRS will give your tax return a closer look.
Travel the World Without Leaving Home in Retirement

You can still visit museums and marvel at their great works of art, tour historical landmarks and stroll through foreign cities ... from the comfort o…
Skip to ContentSkip to Footer