Milestone aside, both tech stocks offer intriguing reasons for long-term investors to buy and hold. 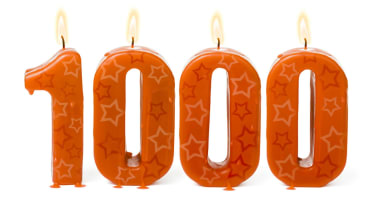 Shares of Amazon.com (symbol AMZN) and Google-parent Alphabet (GOOGL) are neck and neck in their race to $1,000. The stock of the world's largest e-commerce company is trading at $952.82, while the world's largest search engine goes for $956.71. It's a fun contest to watch, but it's really just a distraction.

What truly matters is whether either of these names looks good for the long haul.

Both of these tech stalwarts have been on fire in 2017. Shares of Amazon are up 27.1% for the year-to-date, and Alphabet has gained 20.7%. How good is that? Standard & Poor's 500-stock index, which serves as a benchmark for U.S. stock market performance, has risen 7.1% so far in 2017. Indeed, Amazon and Alphabet, along with fellow technology heavyweight Apple (AAPL), have helped push the tech-heavy Nasdaq Composite index to an all-time high this year. (All prices and gains are as of May 9.)

The potential for outsized profits is a key reason why investors keep pouring money into Amazon and Alphabet, even as the stocks’ prices soar higher and higher. Currently, analysts expect collective earnings for the S&P 500 to increase 10% in 2017, according to data from FactSet. In 2018, the S&P 500 is forecast to deliver earnings growth of 12%.

Amazon and Alphabet make such expectation look almost quaint. Amazon is forecast to see earnings growth of 40% this year and an astonishing 71% next year, according to a survey by Zacks. Alphabet is set for increased earnings of 25% this year and 18% next year. These are fast growth rates for companies as big as Amazon and Alphabet, which have market capitalizations of $455 billion and $653 billion, respectively. No wonder investors are so excited.

And it looks like both companies can keep it up for a while. Amazon's profits are driven primarily by growth of its two main businesses: online retailing and cloud-based computing services sold to corporate customers. None other than billionaire investor Warren Buffett is in awe of CEO Jeff Bezos and his ability to make Amazon thrive in such different industries at the same time. "I've never seen a guy succeed in two businesses almost simultaneously that are really quite divergent in terms of customers and all the operations," Buffett said recently in a CNBC interview.

Alphabet is no slouch either, thanks to the relentless growth of digital advertising for mobile devices. The company also has a large and growing cloud computing business that competes with Amazon’s.

So who gets to $1,000 a share first? Valuation doesn't help much when trying to predict short-term price movements. It looks too far into the future for the traders who move stock prices on a day-to-day basis.

For short-term guesses on where a stock is headed, some investors rely on so-called technical analysis, which focuses on things like share-price movement and trading volume more so than business fundamentals. For what it's worth, based on a technical reading of share-price momentum, Amazon stock has a slightly better chance than Alphabet stock of getting to $1,000 first.

Ultimately, the $1,000-a-share crown counts for little. Between their shorter-term earnings projections and the longer-term outlooks for their respective businesses, both Amazon and Alphabet look like great bets for the long haul. Yes, be patient and buy on the dips considering today’s high share prices, but be sure to buy both names if fast-growth tech stocks have a place in your portfolio.

Small-cap technology stocks might be a rollercoaster ride to hold, but their oversized upside potential makes them worth exploring.
The Best Vanguard Funds for 401(k) Retirement Savers