The head of Berkshire Hathaway usually avoids technology shares, but Apple and IBM are exceptions. 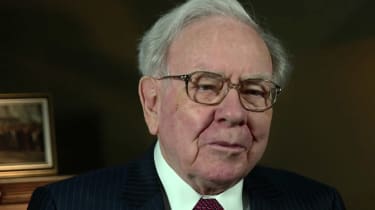 Warren Buffett is known as many things: the Oracle of Omaha, one of the world's richest people and a BFF of fellow billionaire Bill Gates. One thing that Buffett isn't known as: a tech investor.

But the 86-year-old chairman of Berkshire Hathaway (symbol BRK.B), who admits to not even owning an iPhone, is coming around to the investment potential of technology shares. He might have been nudged along by the fact that the two mature tech companies in which Berkshire has taken substantial stakes in recent years both pay solid dividends. While Berkshire doesn't sport a dividend of its own, Buffett has long favored owning stocks offering steady cash payouts. Here's a closer look at two dividend-paying tech stocks owned by Buffett. (All prices and data as of April 14.)

Longtime Berkshire watchers were surprised when the company revealed the stake in International Business Machines (IBM, $169.53) in 2011 because Buffett had shown little interest in technology stocks to that point. But after reading IBM’s annual reports for more than 50 years without buying a single share, he was finally swayed by what he saw closer to home. "We went around to all of our companies to see how their IT departments functioned ... and I just came away with a different view of the position that IBM holds within IT departments and why they hold it and the stickiness and a whole bunch of things," Buffett said at the time.

As of December 31, 2016, Berkshire owned 81.2 million shares of IBM, amounting to 8.5% of the company's outstanding shares. The stock price has been stagnant since Buffett started amassing his stake, but IBM has doubled its dividend in that time frame. The current yield is a healthy 3.3%. Over the past 10 years, according to Longrundata.com, the dividend has increased 17.5% annually, on average. Analysts tracked by Zacks have mixed opinions on IBM. Four rate the stock a strong buy, one a buy, nine a hold, one a sell and two a strong sell.

The decision to buy Apple (AAPL, $141.05) shares last year was likely initiated by one of Buffett's stock-picking lieutenants, either Todd Combs or Ted Weschler. By the end of 2016, according to Berkshire’s annual report, the company held 61.2 million shares of Apple. Buffett has since fully embraced the tech stock. Berkshire's estimated current stake in Apple is 133 million shares, according to the CNBC Berkshire Hathaway Portfolio Tracker, based on public statements Buffett made in early 2017 lauding the iPhone maker.

Apple exhibits some of the attributes Buffett has said he likes: It's a leader in its market, and it has a ton of cash at its disposal. And after a long layoff, Apple resumed its dividend in 2012. The current yield is 1.6%. Analysts like the stock, too. According to Zacks, 19 analysts rate Apple stock a strong buy versus just two who rate it a strong sell. Five analysts rate it a buy, five a hold and none a sell.

These 20 high-quality dividend stocks yield roughly 4% or higher and should grow their payouts even more -- a powerful 1-2 combo for retirement income…
Closing Bell 7/6/20: U.S. Stocks Grab the Baton From China

These 15 dividend stock picks, satisfying income investing needs of every kind, have so far kept their payouts intact while many big firms have cut ba…
Skip to ContentSkip to Footer