For Value, GM Beats Tesla by a Mile

Tesla gets all the attention, but with actual profits, GM can afford to finance innovation. 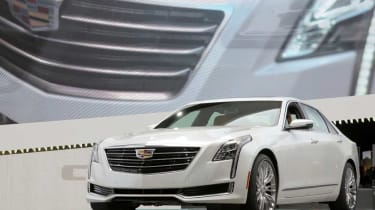 I bought stock in General Motors (symbol GM, $42) roughly two years ago for the simplest of reasons: It was too much of a bargain to pass up. At less than $29 per share, the giant carmaker was selling for just 5.5 times earnings, plus it was paying a dividend that produced a 5% yield on my investment.

I understood why GM was so inexpensive. Wall Street was busy ogling flashy electric car manufacturer Tesla (TSLA, $315) and didn’t have time for stodgy old-school brands, such as Cadillac, Buick and Chevrolet. I didn’t agree.

I admire Tesla’s automobiles, ambition and commitment to clean energy. But investors seem to expect miracles from a company that is still in its infancy. I also think investors were wrong to write off GM, as if this experienced automaker were more hampered than helped by its history, which includes both massive missteps and major accomplishments.

Compare the numbers. Since I bought the shares, investors have grown more optimistic about GM, pushing the stock up some 47%. But the disparate valuation of the two companies makes me think that Wall Street remains giddy about Tesla’s prospects and dismissive of GM’s. I continue to disagree. Let’s start with the numbers to see why.

GM sold an estimated 3 million cars in 2017—about 30 times more than the 100,000 cars Tesla hoped to deliver. During the first nine months of 2017, GM posted a profit of nearly $1.3 billion, even after a $5.4 billion write-off related to the sale of its money-losing European subsidiary; Tesla posted a nearly $1.3 billion loss. Yet GM’s market capitalization, at $59.6 billion (share price times shares outstanding), is just 13% greater than Tesla’s $53.0 billion. And Tesla pays no dividend.

To be fair, there are plenty of reasons to be impressed with Tesla and skeptical of GM. Indeed, Tesla was formed partly in response to GM’s lamebrain decision to get rid of its all-electric car, the EV1, in 2003. Meanwhile, with great fanfare and a lot of investor money, Tesla produced its first vehicle five years later, in 2008. The Palo Alto, Calif., automaker has since produced three new vehicles—the Model S, the Model X and the Model 3. If you lined up the buyers on Tesla’s waiting list, the line would stretch for miles. Upcoming projects include a new roadster, a delivery truck and low-profile solar panels for homes.

Yet Tesla burns through cash faster than its roadster goes from 0 to 60. For its lofty stock price to make sense, it needs to produce millions of cars profitably. I believe that will happen someday, but I’m guessing it will take years and involve plenty of stumbles.

GM knows all about stumbles. Bankruptcy, bailouts and safety scandals turned GM’s CEO suite into a revolving door between 2009 and 2013, when Mary Barra, a GM engineer, was named CEO. After recalling 36 million cars and spending $4.1 billion to fix safety issues in her first year, Barra moved to revive innovation. GM introduced a mid-market all-electric car with a 200-mile range nearly a year before Tesla debuted its Model 3. Sales of the Chevy Bolt, GM’s plug-in electric vehicle, recently surpassed sales of the Tesla Model S.

GM plans to introduce two more electric vehicles in the next two years and another 18 by 2023. Like Tesla, it’s figuring out new ways to power heavy vehicles. GM’s Silent Utility Rover Universal Superstructure—a vehicle that combines fuel cells and a truck chassis—was on display at an October military conference. And GM is testing a self-driving car.

Investors seem to love the fact that Tesla is a technology company that makes cars. Eventually, I think they’ll notice that GM is, too. Better yet, GM can use actual profits to finance innovation. Were I a speculator, I might be tempted to jump on the Tesla bandwagon. As a long-term investor who believes that value will always trump flash in the end, I may buy more GM shares while they are still cheap.

Kathy Kristof is a contributing editor and author of the book Investing 101. You can see her portfolio at kiplinger.com/links/practicalportfolio.