When this accounting term pops up, pay attention. Bankruptcy might be close behind. 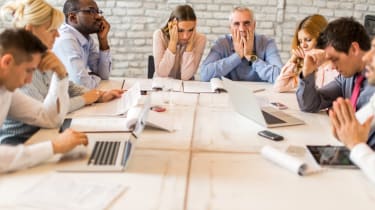 Investors are reading headlines about companies issuing the dreaded "ability to continue as a going concern" warning seemingly every other day.

Sad to say, they might just have to get used to it. The economic damage caused by the pandemic has only just begun to push companies to the brink of bankruptcy.

For the uninitiated, "going concern" is an accounting concept. A company that is able to meet its financial obligations when they come due is considered a going concern. When accountants fear a company might, say, default on some of its debt in the next 12 months, the company is required to report in its financial statements that there are doubts about the firm’s ability to continue as a going concern.

Investors often take a going concern warning as a bankruptcy warning, even though technically speaking, it doesn't mean a Chapter 11 filing is imminent.

But it ain't good news, that's for sure.

As an example of what this kind of warning looks like, here's language from Hertz in a recent SEC filing (emphasis ours):

"If our business does not recover quickly and we are unable to successfully restructure our substantial indebtedness, obtain further waivers or forbearance or raise additional capital, there is substantial doubt that we will be able to continue as a going concern."

It's possible that negotiations with creditors will allow some or all of these companies to avoid having to file for bankruptcy protection. And there's always a chance that a company finds a lifeline somewhere. A loan, an infusion of capital by selling stock or some other sort of bailout could do the trick.

External auditors don't necessarily know everything management is doing behind the scenes to shore up a company's liquidity. Their job is to assess the books and business conditions. That's why a going concern warning isn't an automatic predictor of a bankruptcy filing.

Either way, investors who are paying attention shouldn't be surprised by a company getting slapped with a going concern warning. It's fairly obvious that some sectors of the economy have come to a standstill. Moreover, balance sheets and cash flow statements are public documents.

But no matter how expected a going concern warning might be, it's still unnerving.

Investors with a high tolerance for risk might be comfortable holding stock in a company whose accountants doubt its ability to remain solvent. In the case of a turnaround in which equity investors don't get wiped out, shareholders who bought low can reap rich rewards.

Most, however, will probably sleep better at night by steering clear of shares in such distressed firms.