Outsize three-year mutual fund returns are no longer dragged down by the 2008 stock market crash.

Scan the results in the table below and the phrase "lies, damn lies and statistics" might come to mind. How, you may wonder, can the three-year returns be so spectacular and so many of the one- and five-year figures be so mediocre?

The answer has to do with the timing of these numbers. The results are through March 9, three years to the day since the 2007-09 bear market hit bottom. That means all of the cataclysm's declines (including a 25% drop in early 2009) have been removed from the three-year data. Instead of being dragged down by the bear market, the calculations now reflect a bull market during which U.S. stocks more than doubled in value, a rebound that even the past year's stumble could not dent.

Timing explains the poor five-year numbers, too. Those results incorporate a so-so 2007 and a disastrous 2008, during which the typical U.S. stock fund lost nearly 40%. If a fund lost that much at the outset, it needed to earn nearly 70% just to break even. Even if a fund doubles after first losing 40%, its gain is just 20%. Spread out over five years, that amounts to an annualized return of just 3.7%.

Oh, and here's some other funny math to look forward to: Barring a steep drop in stocks over the rest of 2012, the lost decade for investors won't seem so lost by year-end. That's because the tenth anniversary of the bottom of the 2000–02 bear market is on October 9. At that point, the market's 32% loss in 2002 through that date will no longer show up in the ten-year numbers. 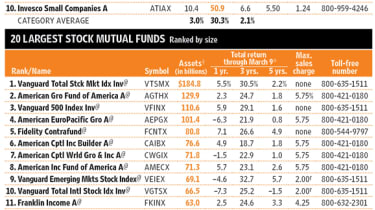