Why Stocks Are a Bargain

Over the long term, which are less risky for the reward they offer -- stocks or bonds?

As night follows day, when the stock market rises, I get phone calls from reporters who want me to talk about the book I coauthored in 1999, Dow 36,000. Just as inevitably, these reporters have not read the book and haven't the foggiest idea what it's about. What they want to know is the precise date that the Dow will hit 36,000, which I don't know now and never claimed I did. But let's dispose of this question as we get on to more important matters.

Assume the future is like the past 80 years and the Dow produces the market's historical rate of return of a little more than 10% annually, including dividends. Also assume that dividend growth will remain at 2%, so the net price rise in the Dow will be 8%. As I write, the Dow is roughly 12,600. At an 8% growth rate, it will hit 36,000 on approximately February 14, 2021. Celebrate with your Valentine.

But Dow 36,000 was about a much more important subject than guessing when a date and a number would coincide. It was about risk. Normally, the riskier something is, the greater the payoff. The book pointed out an anomaly in investing: a situation in which the payoff is far greater even though the risk is about the same.

We examined what economists call the "equity premium puzzle," which is this paradox: Since 1926, a diversified portfolio of stocks has produced a return averaging, after inflation, about 7% a year, including dividends. Over the same period, long-term U.S. Treasury bonds have produced an average return of less than 3% a year, including interest. Stocks are much more profitable than bonds. The payoff is greater, so the risk must be higher, right?

Yet history also shows that, over the long term and after inflation, stocks are not much riskier than bonds. In fact, in his book Stocks for the Long Run, Kiplinger's columnist Jeremy Siegel, of the Wharton School of the University of Pennsylvania, presents 200 years of data in support of this conclusion: "Although it might appear to be riskier to hold stocks than bonds, precisely the opposite is true. The safest long-term investment for the preservation of purchasing power has clearly been stocks, not bonds."

In a common professional judgment, Nicholas Barberis, of Yale University, says, "By any standard measure of risk used by economists, stocks do not appear to be that much riskier than bonds." So what's the explanation for the paradox? Why does one asset return more than another -- that is, provide investors with a "premium" -- if the risk is nearly equal? In a paper co-written with Ming Huang, of Cornell University, and Tano Santos, of Columbia University, Barberis points to behavioral psychology as an explanation. Most investors, he says, are averse to losing money and see stocks, at least in the short run, as being more risky. So they demand a premium -- that is, a higher return.

What this means to you is simple: Own stocks for the long run and profit from other people's misconceptions. By long run I mean at least five years and, even better, ten or more. Stocks are far riskier than bonds in the short term, and that risk can't compensate for the higher average returns. Stick with bonds if your timeline is shorter than five years.

In finance, risk is generally defined as volatility -- the extent to which an asset's returns vary over time. Imagine an investment with returns that were constant -- say, 4% after inflation. Such an asset would have no risk. Now, imagine another with returns that vary -- a gain of 50% one year, a loss of 40% the next, and so on. Over ten years, the average return for the latter investment might also be 4%, but who would choose it over the riskless investment that also returns 4% annually?

Treasury bonds pay a fixed rate of interest, and the U.S. government guarantees to pay an investor's principal (in other words, the loan) back at maturity. But there's still risk -- and a lot of it. Imagine that you buy a bond that matures in ten years and pays 5% interest along the way. What happens if inflation soars to 6%? The interest payments won't be enough to match inflation, and the principal you get back will have a value, or buying power, two-fifths less than your original investment. Meanwhile, the price of the bond, like the price of a stock, bounces up and down -- mainly because of inflation prospects, but also because of investor enthusiasms and fears that can't be predicted. If you have to sell the bond before it matures, you may suffer a loss.

Siegel found that over long periods -- more than 17 years -- bonds have produced losses, after inflation, but stocks never have. In fact, long-term Treasury bonds have suffered losses in eight of the past 30 years, according to Ibbotson Associates, and large-cap stocks have had losses in only six.

Just before Dow 36,000 was written, new investments were introduced that were considered almost riskless: Treasury inflation-protected securities, or TIPS. Enough time has passed that we have an idea of how risky TIPS really are. I took the returns achieved by Vanguard Inflation-Protected Securities mutual fund (symbol VIPSX) and adjusted them for inflation. Here are the annual after-inflation returns, starting in 2001, the fund's first full year, and running through 2006: 6%, 14.2%, 6.1%, 5%, -0.8% and -2.1%. What happened? The demand for TIPS fluctuated because the whims of investors fluctuated. Prices for TIPS jumped up and down the way prices of stocks do, so returns varied. And this was a period in which inflation was relatively consistent, ranging only between 1.6% and 3.4% on an annual basis.

A standard deviation of 5 indicates that about two-thirds of the time, based on history, an asset's returns will vary by five percentage points around its average return. In the case of the TIPS fund, its three-year annualized return through January 31 was 3.3%, so the returns ranged from a loss of about 2% to a gain of about 8% -- hardly consistent.

Neither stocks nor bonds offer guarantees. Risk is the nature of life. As an investor, you have to answer a tough question when gauging risk: Will the future be like the past, or will something different happen? If the past is prologue, then stocks -- held in diversified portfolios -- are a cinch.

Our thesis in Dow 36,000 was that investors were solving the equity-premium puzzle. Since the early 1980s (the Dow was 777 in 1982), they had been growing more rational and were, quite properly, bidding up prices and lowering the premium -- a process that my coauthor, economist Kevin Hassett, and I believed would continue. But we also said we had worries. One was this: "Aggressive, unpredictable nations like Iraq and Iran now have greater access to weapons of mass destruction. It is not hard to imagine investors becoming more nervous about their stocks, not to mention their own survival."

We wrote those words eight years ago. My view is that the economic world has grown more stable, not less, since then. Over the past four years, for example, U.S. interest rates have been remarkably steady. I think stocks today, as a group, are underpriced.

You may disagree. In September 2002, Bill Gross, a celebrated investment manager at Pimco, wrote to his clients: "My message is as follows: Stocks stink and will continue to do so until they're priced appropriately, probably somewhere around Dow 5000." Since then, the Dow has risen more than 5,000 points, or 76%. "Prediction is very difficult," said the Danish physicist Niels Bohr, "especially about the future."

Standard deviation is a measure of volatility -- the lower the number, the less returns will jump up and down from period to period. Stocks return far more than bonds over time, so you'd expect their volatility to be proportionally greater, too. But that's not the case. 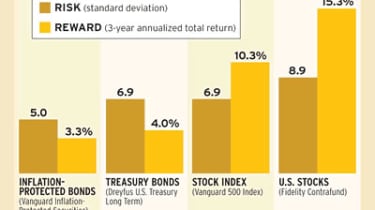 James K. Glassman is a senior fellow at the American Enterprise Institute and editor in chief of The American magazine.