Market Volatility: Get Used to It

The second pullback of 2019 is probably not the end of the bull market. 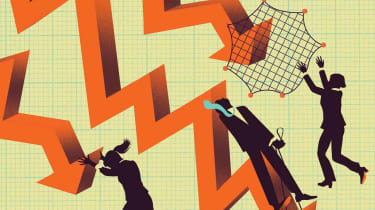 For a bull market that has kept the bear at bay for more than a decade, this stock market is racking up some scary downturns. The one that began after Standard & Poor’s 500-stock index hit a high in late July saw stocks fall close to 6% by mid August, with occasional bounces depending on the news of the day, presidential tweets or interest-rate moves.

The summer swoon still qualifies as just a “pullback,” defined as a drop of between 5% and 9.9% from the market’s most recent high. But that makes the second pullback so far in 2019, following two full-blown corrections—declines of 10% to 19.9% from the high—in 2018. Once you get past 20%, you’re in bear country.

Does the market’s malaise mark the end of the bull’s run? For now, it looks like the bull will live to fight another day, but you can probably expect more pain and certainly more volatility.

The culprit that keeps knocking the wind out of the market is the trade war between the U.S. and China

The safe havens investors seek during times of turmoil, such as gold and U.S. Treasuries, have risen in price as stocks have convulsed (see Time to Invest in Gold?). A sentiment survey from the American Association of Individual Investors found that pessimism spiked in early August to the highest level since December 2018.

The culprit that keeps knocking the wind out of the market is the trade war between the U.S. and China, which, on any given day, appears either intractable or closer to a resolution. Although a portion of the latest round of tariffs on Chinese goods—mostly consumer items—has been delayed until December, the reprieve is only a modest positive and not an economic game changer, say analysts at Bank of America Merrill Lynch. “We still expect the trade war to last indefinitely,” they say.

Worries about the global economy are intensifying. A trusted barometer flashed a recession warning when yields on 10-year Treasuries recently dipped below the yield on two-year notes. An inverted yield curve, as the phenomenon is known, has preceded each of the past six recessions. But the lead times are long—21 months, on average—and stocks have gained an average of 22% before the economy finally rolled over.

What could go right. The positives that investors can latch onto include a strong labor market, healthy consumer spending and a flexible and accommodative Federal Reserve. Market weakness should prove “limited and temporary,” says Canaccord Genuity strategist Tony Dwyer, who sees the S&P 500 at the 3350 level by year-end 2020, a nearly 18% gain from its recent close (prices and returns are as of August 15).

Don’t rush to put new money in the market, says Wells Fargo Investment Institute strategist Darrell Cronk. Better to wait for higher conviction about a market bottom. In the meantime, focus your portfolio on high-quality stocks and bonds. Favor large-company stocks over small-cap issues, for example, and investment-grade bonds over high-yield debt.

Lessen the impact of the trade war on your portfolio with a tilt toward service providers and away from goods producers, say Goldman Sachs strategists. Think more Microsoft (symbol MSFT, $134) and less Apple (AAPL, $202), for instance. Dampen the swings in your portfolio overall with low-volatility exchange-traded funds, such as iShares Edge MSCI Min Vol USA (USMV, $62). Finally, find good international low-vol choices.