Is It Time to Invest in Gold?

Stock market volatility has given investors gold fever. If you chase the rally, don’t overdo it. 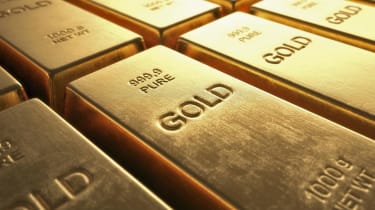 The price of easy money. The Fed cut its key federal funds rate by a quarter of a percentage point in July, the first rate cut since 2008. Kiplinger expects two more rate cuts this year. The tax reform passed in 2017 is estimated to pump more than $1 trillion into the economy over the next 10 years. At least in theory, such economic stimulus in an expanding economy could lead to rising prices, the result of too much money chasing too few goods and services.

Typically, lower U.S. interest rates also bring down the value of the dollar on the world currency exchanges, and that, too, is positive for gold, which is often viewed as an alternative currency. Money follows yields, such as those from Treasury bills, and when U.S. yields fall, money goes to other markets, denominated in other currencies, to get higher returns. In July, President Trump said he had not ruled out a U.S. intervention in world currency markets to weaken the dollar further.

Gold prices thrive on economic uncertainty, and escalating trade tensions have delivered that in spades. “The wild card is the trade war with China,” says Lindsey Bell, investment strategist at CFRA. “If that intensifies, it’s a great environment for gold.” Worries about the dollar and global trade have prompted foreign central banks to increase their gold reserves. Central banks, mainly those in emerging markets, bought 224.4 tons of gold in the second quarter of 2019.

What could derail the rally in gold? Deflation is one risk, although gold has held up well in past periods of falling prices. A larger threat to gold is a global recession during which consumers, especially in China and India, reduce their jewelry purchases. In the end, gold’s value is largely psychological—after all, it pays no dividends and has no earnings. Nevertheless, psychology can be a powerful price driver.

Many advisers recommend as much as a 5% stake in gold—partly as insurance against financial catastrophe and partly as a portfolio diversifier. Gold typically does not move in tandem with stocks, which can improve your returns, adjusted for risk, over long periods of time.

But because gold is prone to large drops, it isn’t an easy investment for most people to hold. “Gold is useful in a portfolio in the same way an F-35 is useful in national defense,” says William Bernstein, a financial adviser and author of the investing book Deep Risk. “Very few people are trained to use it properly.” For example, gold swooned from $850 an ounce in 1980 to $273 an ounce in 1998—a string of losses that would make many investors abandon a gold strategy. “It’s the hardest asset to hold long term in your portfolio,” Bernstein says.

How to invest. If you want to own the bullion itself, you can buy one-ounce American Gold Eagle coins from a dealer, although you’ll pay a markup of 5% to 8%. (Check the current spot gold rate at websites such as www.kitco.com before you buy to see if you’re getting a good price. It can pay to shop around.) Skip collectible coins, which can carry a big premium for rarity. And take a pass on the proof versions that the U.S. Mint sells: They have a beautiful finish but a high price tag. At the moment, a one-ounce American Eagle will set you back about $1,500.

If you simply want gold as a part of your portfolio, consider a commodity gold exchange-traded fund, such as iShares Gold Trust (symbol IAU, $14). The ETF buys and sells physical gold, held by a third-party custodian, and charges 0.25% in annual expenses. A slightly more expensive choice is SPDR Gold Shares (GLD, $141), which also holds physical gold and charges 0.40%.

You might also buy shares of gold-mining companies. Mining stocks tend to rise and fall more than the metal itself because once the price of gold covers production costs, any increase is pure profit. For example, consider a company that produces gold for $1,000 an ounce. If the price of gold were to rise from $1,100 an ounce to $1,200, a 9% increase, the firm’s earnings would double, from $100 per ounce to $200 an ounce.

Gold’s long-dead period from 2013 to 2018 prompted many gold-mining companies to “repair their balance sheets, buy back stock and create shareholder value,” says Will Nasgovitz, CEO of the Heartland Funds. CFRA analyst Matthew Miller recommends Newmont Goldcorp (NEM, $39), up 16% this year. The company sells at 23 times earnings, compared with 17 for the S&P 500. It produces gold at a cost of $900 an ounce, however, and if gold continues its rise, Newmont earnings should rise with it.

Mutual funds and ETFs that invest in gold-mining stocks tend to have relatively high expense ratios. But one good fund choice is American Century Global Gold (BGEIX), up 38.2% so far this year. It charges just 0.67% a year in expenses. Elizabeth Xie and Yulin Long have been managing the fund since May 2016—not a long time, but Long has been at American Century since 2005, and Xie has been there since 2007.

For those who prefer a lower-cost indexed approach, VanEck Vectors Gold Miners ETF (GDX, $29) gives you exposure to the sector for 0.52%. The fund is up 39.2% this year.

Gold and gold-mining stocks are definitely not core portfolio holdings. But if you’re looking for a bit of protection in uncertain times, adding a dollop of gold could make your portfolio shine a bit more brightly.

Vanguard funds account for a third of the 100 most popular 401(k) retirement products. We rank Vanguard's best actively managed funds, including its t…
Don’t Bank on the Safety of Bonds in a Pandemic 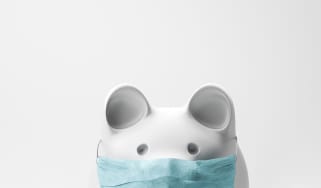 Don’t Bank on the Safety of Bonds in a Pandemic

Bond yields are too low to follow the old investing playbook. Here are some tips to restructure the bond side of your portfolio today.