Why You Should Buy Emerging Markets Stocks Now

All the investing gurus, it seems, are riffing about “submerging markets.” But when everyone agrees on something, chances are high that the crowd is wrong. 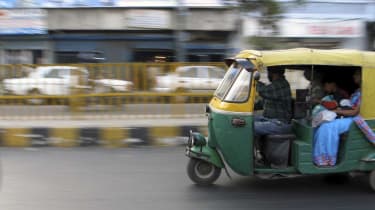 Every investor knows that the time to buy is when stocks are beaten down and cheap. But few investors actually do that. Why? Because stocks usually get trashed for a reason. They get cheap because the news about them is terrible.

Take emerging markets. The news is awful. Most important: The once-sizzling Chinese economy is slowing markedly. What’s more, no one believes the government’s economic numbers.

Slower growth in China has led to a sharp decline in demand for commodities. That’s led once high-flying developing nations such as Brazil and Russia to sink into economic quagmires.

Why even consider emerging markets when you can buy presumably safer U.S. stocks, which have also taken a hit lately?

Another reason to be bullish: For U.S.-based investors, much of the decline in emerging-markets stocks stems from a soaring dollar. The dollar has been strong against virtually all currencies, but it has been particularly strong against emerging-markets currencies, many of which have tumbled 20% or more against the greenback. There are good reasons for the strong dollar, but currency values, like values for nearly all asset classes, tend to regress to the mean. In other words, what goes up typically goes down. It just may not happen right away.

Remember, too, that China’s slowing growth rate is part of the process in the nation’s transition from an exporting powerhouse to a more diversified economy that seeks to better cater to 1.3 billion consumers. China, by the way, accounts for about one-fourth of the total value of emerging-markets stocks.

Listen to Andrew Mattock, comanager of Matthews China Investor (symbol MCHFX), who has been investing in the country for 15 years. “China is changing in the way economists have been asking it to change,” he says. “Will China succeed? If it does, it’s a raging buy. I’m betting that the transition works.”

What about the Chinese stock market bubble, now in the midst of a vicious deflation? Both the bubble and the decline have been wildly exaggerated. The Chinese stock markets in Shanghai and Shenzen, which are almost exclusively the province of individual mainland Chinese investors, soared about 150% from November through April, then plummeted roughly 75%. That left both markets about where they started, with stocks still trading at inflated prices.

But non-Chinese investors, such as U.S. mutual funds, are limited almost exclusively to the Hong Kong Stock Exchange. Most companies trade on just one of the three stock exchanges, but about 110 stocks are dual-listed—that is, they trade both in Hong Kong and on one of the mainland exchanges. “The dual-listed stocks trade at a massive premium in the mainland market,” Mattock says. For instance, the price-earnings ratio for the version of Air China that trades on the mainland is about double the P/E of the share class that trades in Hong Kong. The MSCI China Stock Index, which tracks Hong Kong, trades at just 9 times estimated earnings for the coming 12 months.

I’m not arguing that China doesn’t face huge challenges. The government’s attempt to stop the selloff in mainland China’s stocks was a fiasco. One can only hope that the regime’s mismanagement was a learning experience on the road to financial modernization.

Rusty Johnson, comanager of Harding Loevner Emerging Markets (HLEMX), a member of the Kiplinger 25, thinks China will do far better than investors anticipate. “China isn’t caving in,” he says. “It’s slowing down as it transitions into a service economy.” That said, his fund’s biggest holdings relative to the MSCI Emerging Markets index are not in China but rather in India, Mexico, the Philippines, Poland and Taiwan.

Johnson helped launch the fund 17 years ago and has seen plenty of ups and downs in emerging markets. “When everyone was talking about emerging markets in 2011 as the only place to go, that was foolish,” he says. “Now all you get is talk about how emerging markets are broken, useless. That’s just as foolish.”

What to buy? The Harding Loevner fund is my favorite no-load fund—in spite of a hard-to-swallow 1.45% annual expense ratio. If you use an adviser, ask about American Funds New World F2 (NFFFX), which invests in both emerging markets and multinational companies that do lots of business in those countries. The F2 share class has no front-end load and charges annual expenses of 0.75%.

I know this marks me as old-fashioned, but I’m not keen on emerging-markets index funds. Emerging markets are inefficient, so a first-rate manager can, I believe, cut risk and add to returns. I’d also stay away from individual emerging-markets stocks. You (and I, for that matter) simply don’t have access to the necessary information to pick them.