The economist and market strategist expects Standard & Poor's 500-stock index to rise 14% for the rest of 2018 and no recession for at least a couple of years. 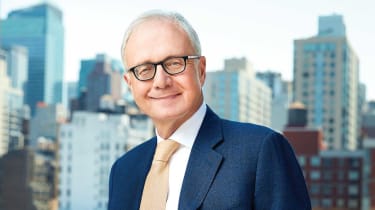 Edward Yardeni is an economist, a market strategist and president of investment research firm Yardeni Research. His new book, Predicting the Markets: A Professional Autobiography, shares the lessons he has learned over 40 years as a market prognosticator.

Where do you see the U.S. stock market headed for the rest of 2018? My target for Standard & Poor's 500-stock index is currently 3100, about a 14% increase from here. The market has been spinning its wheels, going nowhere, since the end of last year. There has been a lot of noise about issues that could cause problems, such as a rebound in inflation leading to higher interest rates or President Trump's protectionism. But I don't think inflation is coming back, and I don't think we'll have a trade war. Meanwhile, corporate earnings expectations have soared thanks to Trump's tax cuts and solid global economic growth.

I like the engineering concept of a signal-to-noise ratio. The signal I'm seeing from earnings is that they're at record highs and going higher. Once the noise about inflation, higher interest rates and protectionism dissipates, the market will go back to focusing on earnings.

Where should investors put their money now? You want to invest globally. Since early 2016, we've seen mounting evidence of a global, synchronized economic expansion. That will continue for a while, although there could be some sputtering along the way. Put half of your stock portfolio in U.S. stocks, 30% in Europe and Japan, and the rest in emerging markets.

What's supporting the bull market? Corporations have gotten a windfall from the impact of tax cuts. Much of that money will go into share buybacks, a major reason the market is rebounding from this latest correction. Also, I don't know of anyone saying a recession is imminent or foreseeable this year or next year. Instead, excesses are being corrected by rolling recessions hitting different industries, such as energy or retail. And although the growth of earnings has unquestionably peaked—I expect growth of 17% or 18% this year compared with 2017—as long as the level of earnings continues to set record highs, that bullish signal will prevail.

I've been quoted—accurately—saying inflation is dead.

What are you most worried about? The key issue for investors is inflation—and, by the way, it always has been and always will be. Inflation drives interest rates and Federal Reserve policy. If you see accelerating inflation, there's a good chance you're in the midst of an economic boom with speculative excesses. That's when the Fed gets accused of being behind the curve, and as they try to catch up by raising rates, it precipitates a credit crunch that leads to recession—and these things happen in a heartbeat. I'm not saying there will never be a recession again, but as long as inflation remains subdued, as I expect, there's no reason for the Fed to raise rates to levels that cause a credit crunch and recession.

So you're not too concerned about inflation? I've been quoted—accurately—saying inflation is dead. It's not going to zero, but it will remain very low, at about 2%. Inflation is not coming back for three reasons: The globalization that started at the end of the Cold War has resulted in markets that are integrated and competitive. The technology revolution is ongoing, disrupting every business model on the planet to do things better, faster and cheaper. And finally, there's demography. Fertility rates have collapsed below replacement rates everywhere except India and Africa. Aging populations contribute to disinflationary forces—older people just don't spend as extravagantly as younger people.

Where do you see the best opportunities for investors now? In terms of stock market sectors, I still like stocks that benefit the most when the economy is growing. Tech has been beaten up of late—to me, that's an opportunity. Financials continue to benefit from credit conditions that remain relatively easy. Companies that make nonessential consumer goods still look quite good. We're back to an extremely low unemployment rate, and consumers are in great shape. It's likely that as they continue to see paychecks bolstered by tax cuts, they'll spend more, benefiting entertainment companies, cruise lines, casinos and hotels. Industrials were whacked by a recession in the energy sector but have come back nicely.

What's your take on the bond market? Bonds are certainly getting more interesting at these somewhat higher yields. Yields on 10-year Treasuries probably won't go up to 4%, but you might get 3.5%—up from about 3% now—and higher yields on corporate bonds. And the good news is that if you don't want to jump into long-term bonds, short-term yields have gotten more attractive. You're not stuck with deposits at the bank earning a fraction of a percentage point. You can earn 2.6% on a two-year Treasury.

What's your best guess for when this aging bull market will end? Age doesn't have much to do with it. Bear markets are almost always associated with recessions, although the stock market usually turns down a few months beforehand. The longer you believe the economic expansion can last, the more bullish it is. Back in 2014, I predicted that the expansion could last until 2019. That looked iffy then, but here we are, and I don't see a recession happening this year, or in 2019 or even in 2020.