Whether you’re pulling in a paycheck or living off investments, dividends can be a great way to reel in some cash. 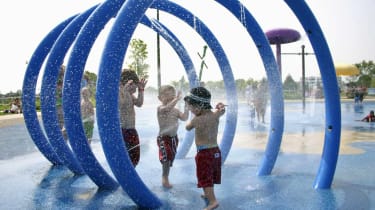 A is for August — and AT&T and AbbVie and Apple, three stocks that pay dividends in August.

Many companies dole out dividends in March, June, September and December. If all your payments land in that timetable, your income stream can dry up for long stretches.

To keep the cash flowing right through vacation, we sorted through payment dates to identify when companies pay out. We focused on firms with steady businesses, sturdy balance sheets and a commitment to uphold their payouts. Check out our August offerings. (Prices and data are as of June 30.)

SEE ALSO: Great Stocks to Get Dividends Every Month

AT&T’s purchase of DirecTV last year is boosting results. Analysts see the telecom giant’s revenues rising 12%, to $165 billion this year, with profits climbing 5%, to $17.6 billion. Growth of such magnitude isn’t likely to last, but AT&T should still be a solid earner, thanks to new TV services it plans to roll out. To help retain customers, the firm is also offering package deals with unlimited mobile data for subscribers who buy TV service, too. The knock on AT&T is that the stock, selling for about 15 times estimated year-ahead earnings, is pricey relative to its earnings growth. But compared with the paltry yield on Treasuries, the stock’s 4.4% yield looks appealing. AT&T’s dividend should keep rising, though modestly. Analysts see AT&T lifting the payout by 2% next year.

AbbVie produces Humira, one of the world’s best-selling drugs. Physicians are prescribing Humira for a growing array of illnesses, including rheumatoid arthritis, Crohn’s disease and psoriasis. Raking in more than $14 billion in annual sales, Humira accounts for more than half of AbbVie revenues and an even higher proportion of the firm’s profits, which are rising steadily.

Unfortunately, Humira’s starring role won’t last. Its U.S. patent expires at the end of 2016. But because Humira is a complex biotech drug, generic versions will likely take several years to gain traction in the marketplace and may not wind up being much less expensive than Humira. Meanwhile, AbbVie is expanding its roster of drugs to treat blood cancers and other diseases. Wall Street sees earnings growth of 12% this year and 18% in 2017.

Skepticism about Apple runs so high that the stock’s price-earnings ratio of 12 is 35% less than the P/E of the average big utility.

Bears argue that Apple’s innovation machine has stalled and that its flagship product, the iPhone, won’t lure as many customers as expected in China and other key markets, where lower-priced smartphones are making inroads. Yet Apple’s competitive strengths remain formidable. Its “ecosystem” of hardware, software and services keeps many customers locked in and coming back for new products. Sales are likely to pick up with the expected September launch of the iPhone 7. Apple is also developing additional revenue streams, such as a new subscription model for app developers and paid search ads on its App Store site. With $233 billion in cash and securities on its balance sheet and access to low-cost debt, Apple’s finances provide plenty of firepower for more dividend hikes.

Here are 13 dividend stocks that each boast a rich history of uninterrupted payouts to shareholders that stretch back at least a century.
Stock Market Today 10/19/20: Investors Lose Their Nerve as Relief Deadline Nears