Master the Rules of Credit Cards to Maximize Your Rewards

Using savvy strategies, such as amassing sign-up bonuses for new rewards credit cards, can translate into free flights or hundreds in cash back each year. 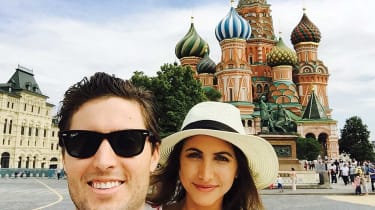 In January 2015, Kyle Zuvella and Andrea Cortina took off on an around-the-world trip. Their 10-month journey took them to more than 40 countries on five continents. They studied Spanish in Chile, explored "Lord of the Rings" landscapes on New Zealand’s North Island, swung by the Great Wall of China, and went on a South African safari before visiting the Middle East and more than a dozen European countries.

The remarkable part of their excursion: They funded most of their flights and two months’ worth of hotel stays with credit card rewards. After a year and a half of diligently racking up points and miles, they had stockpiled nearly 2 million points and miles between them.

Zuvella and Cortina, who are now engaged and live in Santa Monica, Calif., are part of a breed of credit card users—often called travel hackers—who milk the system by “churning,” or applying for cards on a regular basis, to take advantage of hefty sign-up bonuses. (To make the trip, Zuvella quit his job at Visa, where he made his first foray into the world of travel hacking. Cortina was in culinary school at the time.)

Zuvella, 27, was recently approved for his 61st credit card—although he uses only two to three cards regularly for everyday purchases, keeps a few more open to prop up his credit score, and has cancelled the rest. The majority of his miles came from sign-up bonuses. Cortina, 27, followed a similar strategy to bulk up her stash of points and miles, and the two of them used their rewards to pay for various legs of the journey in turn. “The highest return you can get from this hobby is just to target bonuses,” Zuvella says.

Even if you don’t share the couple’s gusto for cycling through sign-up bonuses or scouring online forums for redemption strategies, you can squeeze more value out of your plastic using some of their methods. (They blog about their trips and offer strategies at www.thefarawayguide.com.) Introducing a new rewards card or two and being more strategic about which cards you use can translate into free flights and hotel stays or hundreds of dollars in cash back each year. As long as you pay your bills on time and avoid carrying a balance, this strategy won’t hurt your credit score and may even boost it.

To decide whether a travel or cash-back rewards card works better for you, consider the findings of a 2016 study by personal finance site NerdWallet: Domestic travelers who shell out less than $8,600 a year on travel are better off using a cash-back card and putting the money toward whatever they wish (including stateside trips). International travelers should focus on using a travel rewards card.

Experts recommend rotating your spending among two to three rewards cards. Once you have figured out which type of rewards suits you best, consider adding a more-rewarding card to your wallet if you’re earning only one point or mile per dollar spent. Use the free tools at www.creditcards.com to kick-start your research, or consult Kiplinger’s annual picks (see The Best Rewards Credit Cards). You can probably snag a sweet promotion to jump-start your cache.

Although some lucrative rewards cards carry annual fees, they sometimes come in no-fee versions, too, albeit with weaker rewards and lower sign-up bonuses. Many waive the annual fee for the first year, so you can decide later whether you recouped enough rewards or perks to justify the fee in year two and beyond. If the answer is no, you can often downgrade your card to the no-fee version.

One caveat: Credit card issuers have tightened the rules in recent years, making it more difficult to open and close the same cards and repeatedly rake in bonuses. American Express, for example, allows one bonus per card in your lifetime. Another notable restriction is Chase’s “5/24” rule, which bars you from opening certain new Chase cards if you have already opened five other credit cards (from any bank) within the past 24 months. Citi limits you to one sign-up bonus per “family” of cards (say, Citi cards that earn ThankYou points) within 24 months. Other issuers impose a long waiting period before you can apply for a new card.

If you want travel rewards

Setting a travel goal will help you strategize. Where do you want to go? Which airlines fly there, and which hotel chains have properties there? “A couple of key cards can bring a lot within reach,” says Zach Honig, editor in chief of ThePointsGuy.com. “I have 30 active credit card accounts, but that’s not practical for most people.”

Look for a card that racks up points you can transfer to several airlines and hotels. You can also book through the program’s travel portal if you find a better deal or want to use a non-partnered airline or hotel chain. For example, the Chase Sapphire Preferred ($95 annual fee, waived the first year) pays two points per dollar on travel and dining purchases that can be transferred through the Chase Ultimate Rewards program to airlines such as United and British Airways, as well as hotels such as Marriott. Other transfer programs with one or more participating cards include American Express Membership Rewards, Citi ThankYou Rewards and Starwood Preferred Guest (airlines only).

Another type of travel card lets you rack up points that you can redeem for a statement credit for travel purchases after they have posted to your account, including all kinds of transportation, lodging, tours and discount travel sites (the list depends on your card issuer). For example, the Capital One Venture card ($59 annual fee) pays two miles per dollar spent on anything; you can redeem the miles for past travel purchases or use them to book flights and other travel through their portal. Such cards are simple to use, but they’re less flexible than cards that offer more ways to use your points.

Airline and hotel co-branded cards make sense mostly for diehard brand loyalists because for everyday spending, you’ll usually collect a measly one point per dollar—especially when it comes to airline cards. However, these cards dangle other perks that could outweigh the annual fee. Airline cards might, say, waive your checked-bag fees, offer priority boarding and throw in some lounge passes. Hotel cards often roll in a free night each year or automatically grant you mid-tier status.

If you’re new to the points-and-miles game, applying for a card with a generous sign-up bonus can ease you into the process, says Gary Leff, a points expert and author of the travel blog ViewFromTheWing.com. You’ll typically have to spend a few thousand dollars using the card in the first three months to claim your stash, which usually ranges between 40,000 and 50,000 points for a card that charges a fee. But don’t be seduced by high sign-up bonuses without evaluating the rewards. For example, Keri Anderson, who runs a consulting business for nonprofits and uses points to travel in her spare time, puts much of her spending on her Starwood Preferred Guest from American Express card because she loves Starwood hotels. Because redemptions start at 3,000 points, you need to spend only $3,000 to get a free night. During a recent last-minute trip to Niagara Falls to go wine tasting, she booked a room that cost about $285 a night for 3,000 points. “At nine cents a point, that’s an insane return,” she says.

Don’t spread your spending too thinly over travel rewards cards, because accumulating a smattering of points here and there is less useful than having a few large pools. Rather, allocate purchases, such as dining, to whichever card will bank the most points in that category.

For flights, you’ll get the most bang for your buck by saving up for first- or business-class long-haul tickets that you normally wouldn’t spring for out of pocket. If airline award charts confuse you, you can also plot your strategy using a free service such as RewardExpert.com. Blogs that constantly monitor the world of travel rewards, such as ThePointsGuy.com, can also spark ideas or help you estimate how much each credit card point is worth.

If you prefer cash back

A statement credit is decidedly less thrilling than a first-class airline seat you bought with miles. But “points are just as valuable on the cash-back side,” says Sean McQuay, credit and banking expert at NerdWallet.com. Not to mention that cash is more flexible and won’t lose its value, as airline and hotel points sometimes do. Sign-up bonuses typically range between $100 and $200, but the spending threshold required to earn them is usually lower.

Your default card for everyday purchases should net more than 1% per dollar. Citi Double Cash offers a flat rate of 2%. The Fidelity Rewards Visa Signature offers the same rate, though you must deposit your rewards into a Fidelity account. A handful of cards, such as the Capital One Quicksilver card, return 1.5% on all purchases.

Next, look for a card or two offering a higher return on categories you spend the most on. For example, the American Express Blue Cash Preferred card ($95 annual fee) returns 6% on grocery purchases and 3% on gas. Other cards, such as Chase Freedom or Discover It, yield 5% cash back on rotating categories, but you must opt in to each quarterly promotion.

Refrain from applying for a retail credit card, unless you shop frequently at that store and the ongoing rewards are strong. For example, the Amazon.com Rewards Visa returns 3% on Amazon purchases and 2% at restaurants, gas stations and drugstores (but only 1% on everything else). The Target REDcard grants you a 5% discount on each purchase.

The free Wallaby (www.walla.by) app or browser extension can tell you which of your credit cards will maximize your returns for different purchases. Familiarize yourself with how your issuer defines broad categories, such as dining, groceries and entertainment, so you won’t miss out.

Requesting a statement credit or check is the simplest route to redeeming your rewards. Some issuers sell gift cards as well, and you can often get a discount of 20% or so by buying them with points, says Jill Gonzalez, an analyst at personal finance site WalletHub. Sometimes the way you redeem your points will pump up your rewards. BankAmericard Cash Rewards pays you 10% if you direct your rewards into a Bank of America checking or savings account.

Since this year's tax deadline was pushed back to July 15, many people just recently filed their tax return. That means there are a lot of tax refunds…
Know Why Your Credit Score Changes: 9 Money Moves to Consider

Your credit score is a key indicator of your financial well-being and of the risk you pose to lenders. How good is yours?
52 Super Deals and Discounts for 2020

With a special nod to those of you spending more time at home, we found dozens of deals and discounts, plus ways to save (or make) money.
Skip to ContentSkip to Footer