Skip to headerSkip to main contentSkip to footer
college

How Colleges Can Help Keep Student Borrowing in Check

Schools like Indiana University and Ohio State are trying to stop students from taking out excessive student loans. 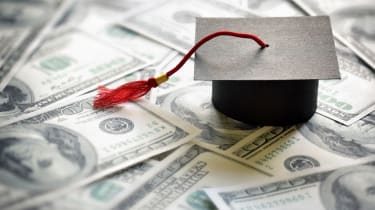 Democratic presidential candidate and former Maryland Gov. Martin O’Malley raised more than a few eyebrows when he recently disclosed that he and his wife had racked up nearly $340,000 in parent PLUS loans (federal education loans for parents or graduate students) to pay the college tab for two of their four children. In the O’Malleys’ case, it was the parents, not the students, who borrowed an exorbitant amount of money. But getting that deeply in debt is no way to pay for college, either for students or for parents. We outline a better approach in Student Loan Lessons From Martin O’Malley.

Let me also take this opportunity to reemphasize my best piece of advice to college-bound families: Run the numbers before you borrow a nickel so you know what you’re getting into. I’ve written about this frequently, and I always recommend a simple loan-repayment calculator at FinAid.org that lets students calculate how much it will cost to repay their loans based on the average starting salary for their chosen profession. Just seeing the numbers makes them more real.

The Hoosier experience. Indiana University is using that same psychology on a grand scale. It is keeping a running tally of how much each student has borrowed and what it will cost to pay it back. Each year, IU sends students a “debt letter” before they take out loans for the coming academic year that shows how much they’ve already borrowed and what their monthly payments and cumulative debt will be.

In the first academic year after the letter was introduced, student-loan borrowing fell by $31 million in the IU system, says Phil Schuman, the university’s director of financial literacy. This year, the state of Indiana required all Indiana schools whose students receive state financial aid to send similar letters.

Schuman points out that the debt letter is just one strategy in the school’s campaign to make students more financially savvy. IU also requires that students actively confirm that they want to take out loans rather than passively filling out an online application. In counseling sessions, the school emphasizes that students don’t have to accept the full amount of loans for which they’re eligible, and it is trying to present a more realistic estimate of living expenses to make it easier for students to budget.

As part of the school’s “Finish in Four” initiative, students are encouraged to take 15 credit hours per semester so they can get a degree in four years and avoid the expense of a fifth year—or more. (In Kiplinger’s rankings of the best values in public and private colleges, we award points only for four-year graduation rates, penalizing those schools at which students take longer to graduate.) “The percentage of students completing 30 credits per academic year has increased significantly,” says James Kennedy, associate vice president and director of financial aid at IU.

Financial wellness. Indiana outlined its student-debt measures at the second annual National Summit on Collegiate Financial Wellness, cosponsored in Bloomington by IU and Ohio State University. Although there’s a growing movement on college campuses to teach students how to manage their personal finances, students are often a hard sell, and panelists at the conference shared their experiences of trying to drum up interest.

For example, if a personal finance class is an elective, it’s often the case that “no one enrolls,” said Christine Conway, of the University of Phoenix. At the same time, students may balk at having to pay to take a required course in personal finance.

To attract students, schools have tried to make classes as hands-on and personal as possible. At Oberlin College, for instance, Beth Tallman starts her course with a lesson on how to manage a bank account and makes students pay only with cash for an entire week.

Personal attention. A number of colleges have started peer counseling programs. At Ohio State, 40 peer coaches scheduled 1,500 one-on-one appointments with students last year, said Ohio State’s Mandi Schweitzer, a codirector of the Bloomington conference. Individual counseling sessions ran the gamut from financial emergencies to questions about student loans and credit scores. The aim of such counseling programs, said Danielle Champlagne, of the University of North Texas, is to teach students “how to make the right decision, not which decision to make.”

The future of student loan debt could look quite a bit different, if President-elect Joe Biden gets his way (and Congress cooperates). From loan forgi…
My Student Loan Relief Is Set to Expire, What Now?

Millions of student loan borrowers are in for a rude awakening after Dec. 31. The ability to suspend loan payments is coming to an end, so you need to…
Some College Students Can Still Get a Stimulus Check