We rank the top public and private schools, based on quality and affordability. 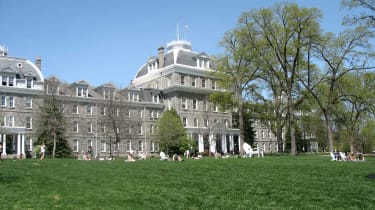 You may have an eagle eye for spotting good deals in day-to-day life, but zeroing in on schools that best fit your child's interests and offer the best bang for your educational buck is no small feat. To help you sort through the choices, from tiny schools to mammoth institutions, and from small college towns to campuses intertwined with major cities, we give you our annual list of 300 best-value colleges and universities. These 300 schools top our rankings because they best meet our definition of value: a quality education at an affordable price. As we have in recent years, we present a combined list of colleges as well as separate lists of the best values in private universities, private liberal arts colleges and public colleges.

For each list, we start by examining academic measures, including how competitive admission to a school is and how efficiently it gets students to their degree. (The majority of schools on our lists have four-year graduation rates that are above the average of 33% for public schools and 53% for private schools.) From there, we look for schools with reasonable price tags, generous financial aid or both. Because the best value for your family may be a public college or university outside your state, we use out-of-state cost figures for public colleges on our combined list but rank the schools using in-state costs for our public schools list. As with last year’s list, we’ve also included future earnings data alongside each school to give you an idea of what attending a particular institution may mean for your child’s post-graduation salary.

Topping our combined list this year is Swarthmore College, a small, competitive liberal arts college outside of Philadelphia. Princeton University, in Princeton, N.J., leads the private universities list for the third straight time, and the University of North Carolina at Chapel Hill—a perennial winner—once again takes top honors in our rankings of public colleges.

The rise in the cost of a college degree may seem unstoppable, but it has slowed in recent years. In 2016–17, the average sticker price at an in-state, four-year public institution, including tuition, fees, and room and board, rose 2.7%, to $20,090 a year, according to the College Board. The average published cost of attendance at private colleges and for out-of-state students at public colleges rose 3.4%, to $45,370 and $35,370 per year, respectively.

As you look over our lists of best values, you’ll notice that many of the schools ring in with an annual total cost of $60,000-plus, and a few post an eye-popping sticker price of more than $70,000 a year. That hardly sounds like a “best value,” but most families don’t pay the full amount. These schools offer generous need-based financial aid, often reducing the school’s net price to between one-third and one-half of the published price.

Because private schools typically offer more-generous financial aid and have a higher graduation rate than public colleges, they dominate the top spots on our combined list. And the institutions with the highest price tags often do the best job of slashing them down to size after financial aid. For example, at Columbia University (number 28 on our combined list and number 12 among private universities), nearly half of the students receive need-based aid, and the average award slashes the school’s annual $70,048 price tag to $22,558. Many schools in our rankings also offer non-need-based aid.

Across the country, the average annual financial aid award hasn’t kept pace with growing sticker prices, according to the College Board. But six of the top 10 schools on our combined list—including top-ranked Swarthmore, with an average net price about $1,800 lower than last year—post a lower average net price than they did in our 2016 rankings, as do about five dozen other schools on our full list. (Use our tool: Find the Best College for You)

The average debt of student borrowers continues to climb. At four-year private colleges in 2015, student borrowers racked up an average of $31,400 in debt; those attending public colleges borrowed an average of $26,800. How much strain repayment puts on students’ budgets after they graduate depends on how much they borrow, their career path and, in some cases, where they went to school. A glance at our sortable rankings tables show that “no loan” schools, such as Swarthmore, Princeton (number 3 on our combined list), Pomona College (number 12) and Bowdoin (number 18), do a fine job of keeping student borrowing to a minimum. Students from schools with a heavy concentration of engineers, such as the California Institute of Technology (number 19 on the combined list) and the Georgia Institute of Technology (number 9 on the public school list), boast some of the highest post-graduation earnings, as do graduates of the Ivy League schools.

Planning for financial aid awards is slowly getting easier. Recent changes to the Free Application for Federal Student Aid, which is used to determine financial aid awards from the federal government as well as from colleges, allow students and their families to file the form three months earlier in the academic year—as early as October 1. And instead of using estimated data from tax returns not yet filed, families will now use earlier returns to report income and assets. As a result, some colleges may send financial aid offers (which now typically arrive in March or April) earlier, helping you determine how much your family will be expected to pay.

Swarthmore College moved to the head of our combined list this year in part because of generous financial aid awards and a competitive 12% admission rate. It also leads our list of liberal arts colleges for the sixth time. Most of its idyllic 425-acre campus, 11 miles outside of Philadelphia, is set on an arboretum. Swatties can hop a train at the station at the edge of campus for the 30-minute ride to Philly’s Center City.

Swarthmore’s annual sticker price ($64,840) is sobering at first glance. But more than half of its students receive need-based aid, and the average award slashes the total cost of attendance by 68%, to $20,584. Like many of the institutions in the upper tier of our rankings, the school’s financial aid awards keep loans off the table. All aid is in the form of scholarships and grants. One-third of students still borrow, but the average debt among recent graduates was $18,262, about 40% less than the national average for borrowers at private colleges.

Among private universities, Princeton continues to lead the pack for the third time in as many years. A slim 7% admission rate and the highest four-year graduation rate (90%) among our top 10 private universities help this Ivy League institution solidify its spot. Nearly 60% of students—including many from families with an income of $250,000 a year or more—receive need-based aid. Like Swarthmore, Princeton keeps loans out of the financial aid mix. Roughly one in six families report borrowing on their own, but the average debt among 2015 graduates who borrowed was a modest $8,577, among the lowest of all 300 colleges on our list. Princeton has been in the top three on our combined list of best college values since 2015.

The University of North Carolina at Chapel Hill deserves special kudos because it tops the public colleges for the 16th straight time (a clean sweep of Kiplinger’s public college rankings). The Tar Heels also claim the best out-of-state value and the ninth spot on our combined list. Solid academics, including a 30% admission rate and an 82% four-year graduation rate, combined with modest cost increases and generous financial aid awards, help this public research university continue to be a sweet deal. Carolina’s in-state sticker price is comparable to that of other public colleges, but the average net price for in-state students after need-based aid is a bargain at $4,250 a year. The average need-based aid award of $17,244 also brings the annual net price for out-of-state students to less than $30,000. Carolina and the University of Virginia (number 2 for in-state and out-of-state value; number 46 on our combined list) are the only two public colleges in our rankings to meet 100% of students’ demonstrated financial need.

You don’t have to stick to the top of our list to find great values. Among our 300 schools are large universities with a broad array of programs, as well as small liberal arts colleges that represent the ivy-covered ideal. For example, Bowdoin College, a classic liberal arts college in coastal Maine, has ascended 10 places on our combined list this year (see our story Bowdoin College: A Bright Star Downeast).

Students interested in a single-gender school will find great values here, including 10 schools for women and two for men. Among them: Wellesley College, a women’s college near Boston (number 10 on our combined list) and Wabash College (number 192), a men-only school in Crawfordsville, Ind.

You’ll also find schools with a religious focus or a classical curriculum. Thomas Aquinas College, a Catholic liberal arts college located 65 miles northwest of Los Angeles on the edge of Los Padres National Forest, has both. Number seven on our combined list, this pint-sized school combines a “great books” education that focuses on analyzing the works of Aristotle, Homer and Shakespeare, among others, with the morals and traditions of the Catholic Church. An impressive 75% of students receive need-based aid, and the average award brings the school’s net price to $17,523. A tuition freeze that began during the 2013–14 academic year has kept the school’s annual sticker price from climbing.

Colleges and universities face steep budget cuts, enrollment challenges and new types of competition as a result of COVID-19. We cover the changes you…
How to Fund a Memorial Scholarship to Honor a Veteran

How to Fund a Memorial Scholarship to Honor a Veteran

With the help of a college or community foundation, you can establish a scholarship in the name of a loved one to help students in perpetuity.
How to Endow a Scholarship to Honor a Veteran

How to Endow a Scholarship to Honor a Veteran

You may be able to set up a scholarship fund through a college or community foundation, or support educational programs through a charity that special…
Gifts for Grads to Build Good Money Habits

Today’s graduates aren’t destined to share the same fate as past generations, so it’s important for them to ramp up their money skills.
Skip to ContentSkip to Footer