No Reason to Fear a Housing Bubble

Look for recent price spikes to ease as new construction picks up and more homes come on the market.

by: Gillian B. White

Worries that there’s an out-of-control housing price run-up in the works are overblown. There are huge differences between what’s happening now and the crises of last decade, and there’s little reason to see immediate danger even in the most torrid of today’s real estate markets.

The current heat in the housing market is a short-term phenomenon. There has been a noticeable pickup in demand. The slowly improving economy and better job growth mean more would-be homeowners in the market, while cash-paying investors continue to comb listings for properties they can rent for a few years before selling at a profit. For both groups, low interest rates are also alluring.

But supply is constrained, with many homes still stuck in the foreclosure process plus droves of owners who managed to stay current on mortgage payments, but whose homes aren’t worth what they owe on them, reluctant to sell at a loss. And new-home construction is only slowly recovering; it’s still running at just half the pre-boom level.

As supply and demand come into better balance, the pace of price hikes will ease. Figure that on average, nationwide, the increase in 2014 will be about 4% or so, roughly half the 8.5% increase likely to be racked up in this unusual year. After that, look for a gradual return to the historical norm — average home values rising by about one percentage point more than the inflation rate each year.

Meanwhile, a closer look at the situation today in cities around the country is revealing. Yes, some have experienced strong, even extreme price hikes. But consider the starting point. Existing homes in Las Vegas and Phoenix, up 22% from early 2012 to early 2013, are still more than 40% below those cities’ peak housing prices. In San Francisco, L.A., Atlanta, Detroit and other metro areas experiencing strong appreciation, home values remain well below the high points of last decade. 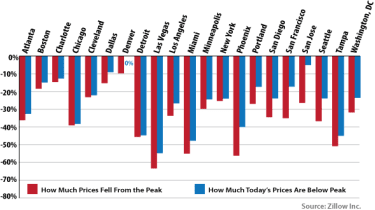 Only a few major metro areas are at or close to previous peaks in prices. Denver, for example, is there, but the Mile High City never experienced the extremes of the bubble and bust. San Jose, Calif., the heart of Silicon Valley, is 5% off its high.

What’s more, homes, on the whole, remain affordable. Only 13% of median family income is typically being chewed up by mortgage payments. Compare that with 24% in 2006. Interest rates are likely to stay low for some time, edging toward 4% by January, then climbing by no more than a percentage point or so in 2014. So homeownership won’t zoom out of reach. Even after the Federal Reserve decides to put an end to its easy-money policy, spurring inflation expectations and higher long-term rates, it will do so gradually. There will be a slow adjustment to the housing market rather than a shock.

Even more important: Only truly creditworthy borrowers are getting loans. The no-documentation, interest-only loans that made it easy for anyone to buy in the 2000s, facilitating a home-buying frenzy across the socio-economic spectrum, have entirely disappeared. This time, lenders are keeping a tight rein on credit.

Fewer than 10% of investors use free background checks like Investor.gov, BrokerCheck or IAPD to check their financial advisers’ backgrounds. These on…
13 Tax Breaks for Homeowners and Home Buyers

Buying a home may be one of the biggest purchases you will ever make.
11 Things Every Home Seller Should Do

11 Things Every Home Seller Should Do

As a home seller, your goal is to sell your property quickly for the most money possible.
Skip to ContentSkip to Footer