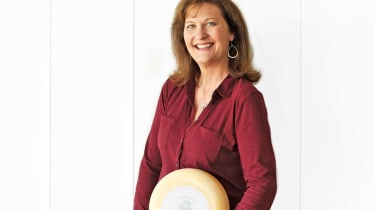 Kiplinger's spoke with Diana Giacomini Hagan, 50, of Marin County, Calif., about why she decided to ditch her job in corporate America to join the family business. Here are excerpts from our interview:

You grew up on the farm? My parents bought the dairy in 1959, and my three sisters and I grew up here. Our mother, who had been a teacher, sent us away to get a good education—we all went to college and majored in business—and my father brought us back.

How? In the mid to late 1990s, production of artisanal cheese had just begun to take off. My dad decided he wanted to bring the farm’s milk directly to consumers by making cheese. He was about 60 then and didn’t think that he and our mother could do it on their own. He asked my sisters and me if we would be interested in pursuing it with them. Lynn and Jo got involved up front. After a couple of years of research, they hired a cheese maker and produced their first batch of a classic-style blue in 2000.

Why did you return? In 2008, I was working for a private-equity real estate firm in San Francisco. When the market turned, everyone in my department was let go. By that time, I was burned out. I had worked nonstop since college, and the last job was a grinder. Plus, I was married and had a young child. I thought I would take a breather. But in late 2008, Lynn asked me to come on board temporarily to add inventory management to the farm’s accounting system. By early 2009, I was working full-time, and later that year I became chief financial officer. I never looked back.

What’s the scope of your business? We milk 350 cows, manage 750 acres of pasture and have about 50 employees. Sales totaled more than $5 million in 2013, and we’re on track for a 15% to 20% increase in pounds sold this year. We produce and sell three cheeses nationally: Point Reyes Original Blue, Bay Blue and Toma, which is similar to a young Gouda or Havarti. We also sell one cheese regionally, a fresh mozzarella.

You co-own the farm? My parents had given us minor shares of the farm over the years. By the end of 2010, they finished their estate planning and transferred ownership to me and my three sisters in equal shares.

How is working with your sisters? It was challenging at first. I know them better than most people, but all of us are a bit type A. It takes time to get comfortable with when it’s okay to make a decision yourself and when to get the group involved. We make sure to have executive meetings, where we talk about business and family issues, which often overlap.

Do you make a living? I cut my income by at least half when I started, and although it has risen, it’s probably still half of what I could make elsewhere. But my husband makes a good living, so we haven’t suffered financially.

Are there other rewards? Last year we won Sofi awards—the Oscars of the food industry—for our Bay Blue and Toma cheeses from the Specialty Food Association. This year, our Bay Blue won second place in the best-of-show category from the American Cheese Society. We have also won a prestigious conservation award for our sustainability efforts on the farm. I’m working with finances, not making cheese, but it feels like a true team effort with my sisters, our dad and our cheese maker. My mom passed away just a few years after I returned. I was blessed to be able to spend more time with her.

Tax breaks aren't just for the rich. There are plenty of them that are only available to middle- and low-income Americans.
Tax Changes and Key Amounts for the 2020 Tax Year

Americans are facing a long list of tax changes for the 2020 tax year...and it's never too early to start thinking about next year's return.
The Answers to More RMD Questions