Success Story: From Journalism to Medicine 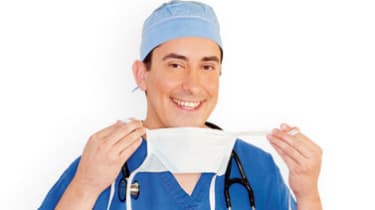 James Lozada, 36, of League City, Tex., gave up his longtime career in broadcast journalism in 2006 to become a medical student and explore a new career path. Eight years later, he's now a resident in anesthesiology at the University of Texas Medical Branch at Galveston. Here, he explains what led to that choice:

Why medicine? It appealed to me from a young age. I was in a health-occupations program in high school, and I worked full-time as a phlebotomist [a technician who draws blood] through college. I probably would have pursued premed as an undergraduate, except for a less-than-stellar freshman year. Instead, I majored in broadcast journalism. As a journalist, many times I would cover health stories in a hospital and think, This is where I should be.

Why did you leave TV news? I found that sensational stories were favored over thought-provoking ones. I couldn’t see myself covering fires, murders and accidents decade after decade. It’s also a very unstable gig, requiring you to move frequently to excel. When I left in 2006, the news environment was changing from traditional to new media, and it seemed like an uncertain time for journalism. Reporters around me were getting fired, and I wanted more stability.

What was your first step? I left Las Vegas and moved back in with my parents in Texas. At the University of Texas at Arlington, I took the science, math and other prerequisite courses for med school. For a year and a half, I went to school full-time during the day and worked at the hospital full-time at night. I slept three hours a day.

Where did you go to medical school? I applied to schools all over the U.S., and I attended the Lake Erie College of Osteopathic Medicine, in Greensburg, Pa., near Pittsburgh. Osteopathic doctors, or DOs, practice medicine and specialize just like MDs. But I found that osteopathic schools are sometimes more accepting of applicants with nontraditional backgrounds such as mine. I graduated at the top of my class.

How did you pay for your edu­cation? Besides working, I used $230,000 in federal Stafford and Direct PLUS loans, with rates ranging from 6.3% to 8%. I believed that if I went into a career that paid well, I would be able to pay off those loans. I’m making $48,685 now, and that will increase to $52,178 by my fourth year of residency. The most I ever earned as a TV reporter was about $50,000 annually. When I finish my residency, I plan to go into private practice.

Has your previous career helped you? It helps me communicate with my patients or a medical team. The ability to write has also helped me along the way, from personal statements for med school and residency applications to research reports.

What has been hardest? It’s sometimes difficult to have enough time to maintain good relationships with family and friends. My wife and I have two boys, with a third son expected soon.

Your greatest satisfaction? I’m the only one of four kids in my family to go to college. My mom is very proud of me and probably also amazed. I told my son just the other day, “It doesn’t matter what your background is, how wealthy your family is or what college you go to. Your belief in yourself will help you achieve your goals no matter what.”

Have a success story you want to share? Write us at successstory@kiplinger.com.