Changing Times: Prices Then and Now 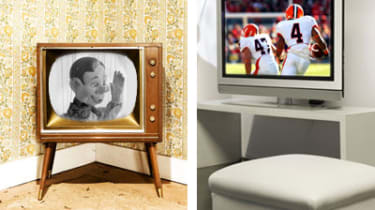 Founded in 1947, Kiplinger's Personal Finance magazine will soon celebrate its 60th year. Much has changed over the past six decades. Technological advancements have improved many products, and consumer choices have multiplied. Prices for everyday items have fluctuated -- some have gone up, others have gone down. Curious to know what a refrigerator, TV, car or cup of coffee cost in 1947? And how that compares with today's prices? Take a trip down memory lane and do some comparison shopping. The slide show begins to the right . . . 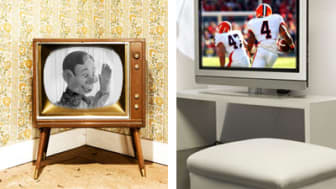 Fun Fact: The modern refrigerator first hit the market in 1925. By 1969, you could get ice and water from the door of your refrigerator.

In 1947, the two-door refrigerator-freezer combination was introduced to consumers, with temperatures ranging from 0 to 38 degrees Fahrenheit. A cooler and a freezer in one? What a concept! Today's GE Profile (shown at far right) is able to create a range of microclimates to better preserve food. Nowadays, most every kitchen has a fridge with features that dispense water, turbo cool and reduce freezer burn.

Color, Remotes and Plasma, Oh My! 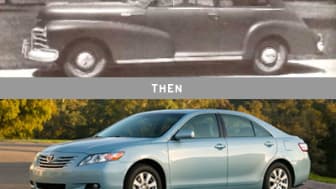 Fun Fact: The average U.S. household has a TV on for 7 hours and 40 minutes each day.

Orson Welles once said, "I hate television. I hate it as much as peanuts. But I can't stop eating peanuts." The video console was a technological marvel 60 years ago, and Americans' appetite for TV has only grown. Imagine: In the old days, you had to get up off the couch to change the channel. Today we can watch multiple shows on one big screen and record them at the same time -- in color, with surround sound. Thanks to technology, plasma, high definition and projection TVs now provide crystal-clear pictures, leaving antennas and static simply a memory. 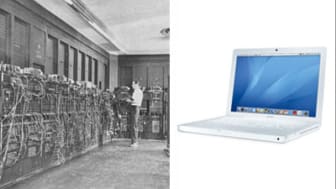 Fun Fact: Some cars today give you driving directions, and others parallel park themselves.

The auto industry has been turned upside down in the past 60 years. Back in 1947, Detroit reigned supreme. Fast-forward to today, and Japanese automakers have taken up the crown. Horsepower has increased, design has been streamlined and fuel efficiency has improved dramatically. Such advancements have helped make the Toyota Camry the best-selling car for seven of the past eight years. 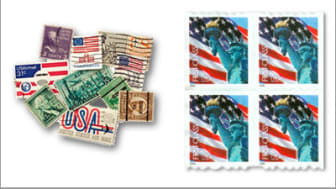 As computing power has increased, the size and price of computers have plummeted. The ENIAC was the size of a room and weighed nearly 31 tons. Today, desktop computers just keep getting smaller and faster, and portable computers are thin and light enough to sit on your lap, such as the Apple MacBook, shown here.

Making a Stamp in History 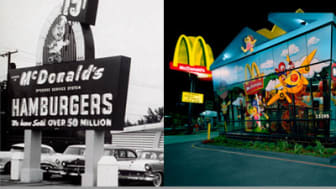 Fun Fact: Benjamin Franklin and George Washington have appeared on the most U.S. stamps.

Before e-mail, you needed stamps to get a letter from here to the other side of the U.S. Although sending a letter is now referred to as "snail mail," sometimes only paper will suffice. In such instances, instead of licking your stamp, you just stick on a self-adhesive one. And you can choose from numerous commemorative stamps, which celebrate everything from holidays to pop culture. In fact, the issuing of stamps honoring the King of Rock 'n Roll turned into one of the great pop-culture debates -- do you prefer the Thin Elvis or the Fat Elvis?

Do You Want Fries With That? 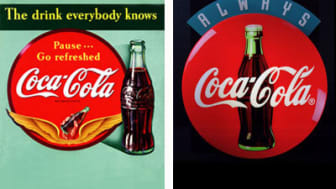 The golden arches of McDonald's, the fast-food chain made famous by Ray Kroc, today are globally known. The first McDonald's franchise with a drive thru opened in Phoenix, Ariz.; it later became the prototype for all future McDonald's restaurants. While the hamburger remains nearly unchanged since its beginning, McDonald's now offers a variety of chicken, fish and salad items on its menu. And, of course, fries.

Teaching the World to Sing in Perfect Harmony 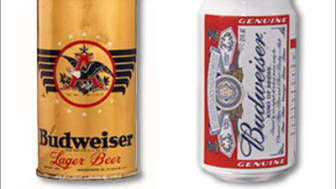 Fun Fact: In 1985, Coca-Cola was the first soft drink to be consumed in space aboard the Space Shuttle Challenger.

Since its creation in 1886, Coca-Cola has bottled more than ten billion gallons of soda. The company had a hiccup when it reformulated the soft drink in 1985; New Coke was heavily criticized, and the consumer uproar forced the company to reembrace Classic Coke. Still the company's mainstay, Coca-Cola Classic now shares the shelves with a multitude of Coke varieties -- from Vanilla Coke and Coke with Lime to Coke Blak and Coke Zero.

The King of Beers 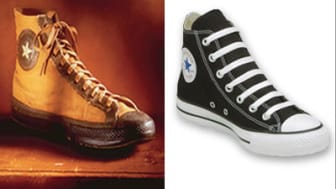 Anheuser-Busch began canning their beers in 1936. Over the years, Budweiser has made its mark on American life and culture, from its famous Clydesdale horses to the "Wassup!" commercials. Today it sells more than 100 million barrels of suds annually all over the world. Budweiser remains the best-selling beer in the U.S. 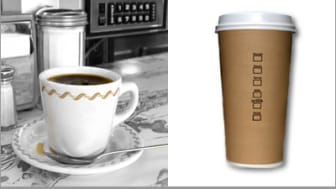 Fun Fact: In 1935, Chuck Taylor invented what we know today as a basketball -- he created a leather ball free of stitches to improve bounce.

Charles "Chuck" Taylor was a basketball player for the original Celtics before becoming a salesman of the Converse sneaker and contributing to its redesign. The shoe today has a design that remains true to its canvas-and-rubber roots, and more than 750 million pairs of the Chuck Taylor All Star sneakers have been sold in 144 countries. 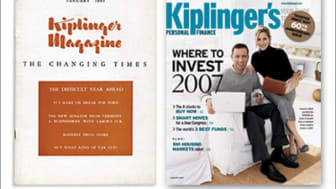 Fun Fact: Starbucks opened its first coffee shop in 1971 in Seattle; the company now has more than 12,400 locations worldwide.

For many years, your only coffee choices were to add sugar and creamer. Then the options expanded to instant coffee and decaf. But in the 1990s, the coffeehouse craze and the advent of coffeehouse chains, such as Starbucks and Caribou Coffee, turned having a regular cup of coffee into a lifestyle choice. Java now comes in all kinds of forms, from lattes to cappuccinos. You can add flavors, such as hazelnut and French vanilla. And get it piping hot or ice cold. 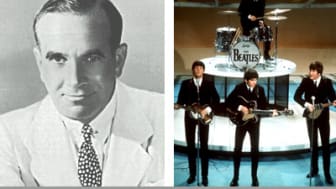 Fun Fact: Kiplinger's Personal Finance magazine has blazed the trail in helping Americans make the most of their money.

As World War II drew to a close, W.M. Kiplinger, the founder of the Kiplinger Letter, had an idea to launch a consumer magazine designed to help American families manage their financial affairs. In 1947, his son, Austin Kiplinger, became the executive editor of Kiplinger Magazine, the first magazine devoted to personal finance. As times changed, so did the name, first to Changing Times and later to Kiplinger's Personal Finance. For more on the magazine's origins, watch our webcast of Austin Kiplinger at kiplinger.com/yourretirement/fortyplus. 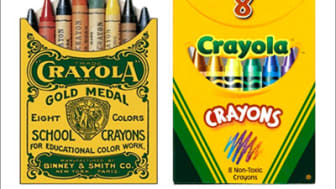 Top-Selling Musical Act Of All Time

Fun Fact: Al Jolson coined the phrase "You ain't heard nothin' yet." The Beatles? "All You Need Is Love"

Dubbed the "World's Greatest Entertainer," Al Jolson made more than 200 recordings and appeared in 11 films in his career. A singer as well as an actor, Jolson starred in the first feature-length talking film, The Jazz Singer. The four working-class lads from Liverpool also made several feature films, including A Hard Day's Night and Help! Although the band broke up in 1970 and only Paul McCartney and Ringo Starr are still around, the Beatles remain the best-selling entertainers of all time. 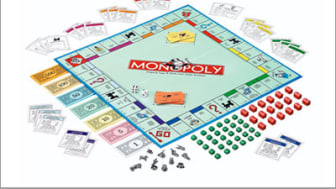 Children in the U.S. spend nearly 6.3 billion hours coloring a year. Odds are they are still using a Crayola crayon. The first Crayola box of crayons was purchased in 1903 for five cents. That box included the same eight colors that exist in today's eight pack: red, blue, yellow, green, violet, orange, black and brown. Today, Crayola crayons are available in 120 colors and packaged in 12 languages.

Fun Fact: From 1943 to 1947, Monopoly tokens were made out of wood because of the World War II metal shortage.

One might think that with the rise of video and hand-held games, that board games would have taken a back seat. But Monopoly, one of the quintessential American games, has withstood the test of time. More than 200 million sets of the Monopoly board game have been sold worldwide in 26 languages in 80 countries. And now you can get Monopoly sets with various themes, from the Star Wars edition to the Chicago edition. Themes change: The game remains the same.