As wrenching as it has been for many, the collapse of the U.S. 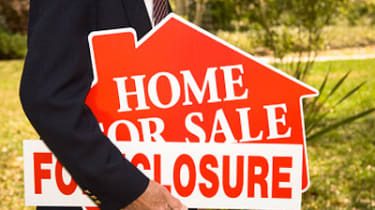 As wrenching as it has been for many, the collapse of the U.S. housing market has created an upside for buyers of distressed properties. Foreclosed homes are selling for one-third less, on average, than “normal” homes on the market, according to the latest quarterly data from RealtyTrac, which follows public foreclosure filings. Here are the 10 metropolitan areas with the largest number of foreclosures.

As the economy slowly recovers, the number of homeowners falling delinquent on their mortgage payments is falling. But more foreclosures will be coming to market in 2011 as lenders work through their inventory of properties, many still tied up in legal wrangling. So far, lenders have repossessed fewer than half of the foreclosures in major U.S. cities. Plenty more homes will eventually hit  the market. This will offer more buying oppurtinities for residential buyers and investors alike.

The slide show begins with the navigation bar to your right.

Miami tops the list with the most homes in foreclosure, and more will come, especially among prime borrowers pressed by an 11.8% unemployment rate. Home sales in Miami have accelerated rapidly in the past year, especially in the glutted condo market. Condo sales grew by 43% over the year before, but the median price fell by 9%, to $115,000, pushed down by the glut of distressed properties. The competition to snap them up will be intense.This House 2,070-square-foot home in Cutler Bay community built in 2005. Three bedrooms, 2.5 baths, loft room and two-car garage.Last sold for: $372,000 (2005)Current asking price: $220,000

Despite an unemployment rate in Los Angeles of 11.7%, the number of foreclosures fell by almost 30% during the past year. Meanwhile, overall home sales dropped by 13%, and the median home price grew by 5.6%. If lenders continue to hold on to properties in inventory, buyers soon may do as well buying a “normal” home for sale as they would buying a foreclosure.This House 1,276-square-foot home in the Polytechnic High area of Long Beach built in 1907. Three bedrooms, two baths, three-car parking in driveway, large front porch and enclosed patioLast sold for: $230,000 (2003)Current asking price: $249,900

Over the past year, the number of foreclosed properties in Chicago shot up by 35%. Now that unemployment has settled to about 9%, the rate of foreclosure is expected to fall. But foreclosure buyers can still snag a bargain.This House 1,891-square-foot bungalow on Chicago’s Northwest side, built in 1926 on 0.9 acres. Five bedrooms, two baths and rear deckLast sold for: $278,000 (2001)Current asking price: $144,500

Phoenix experienced a small decrease in the number of homes in foreclosure during the past year. With an unemployment rate of 8.5%, below the national average of 9.1%, and a modestly recovering economy, the rate of foreclosure is expected to fall even further. But with the average sales price of a foreclosure almost the same as the median home price, home buyers will have to work to snag the best foreclosure bargains.This House 2,542-square-foot home in Phoenix’s North Gateway Village built in 2006. Three bedrooms, three bathsLast sold for: $305,990 (2007)Current asking price: $175,000

Despite a 14.2% unemployment rate, the number of properties in foreclosure has fallen sharply over the past year here. Meanwhile, the median home sales price rose by 8.1% -- to a level close to the average foreclosure sales price -- while sales of single-family homes fell by 27%. That means foreclosure buyers and investors may do just as well with a traditional sale as with a foreclosure.This House 1,088-square-foot ranch in Riverside, near the Santa Ana River Regional Park, built in 1952. Three bedrooms, one bath, two-car garageLast sold for: $385,000 (2006)Current price: $159,900

With the highest rate of foreclosure among the ten cities -- one in 25 homes -- Las Vegas has been savaged by the real estate bust. An unemployment rate of 14.1% -- higher than Detroit’s -- continues to undercut economic recovery and contributes to homeowners’ woes. Overall, sales of single-family homes fell 17% from 2009-2010, while the median home price dipped 3.1%. A whopping 70% of all sales in November involved a foreclosure or short sale, and nearly half were purchased with cash, mainly from investors. That means traditional buyers face plenty of competition in the foreclosure market.This House 2,088-square-foot home in Las Vegas built in 2005. Three bedrooms, two baths, with loft, two-car garage and covered patioLast sold for: $337,488 (2005)Current asking price: $142,000

The metro area’s unemployment rate (9.7%) is close to the U.S. average and is falling, so the foreclosure rate should level off or fall later this year. But Atlanta has a larger-than-average share of subprime mortgages, and foreclosures are still on the rise -- good news for bargain hunters. Overall, home sales are declining, and the median home price in Atlanta has fallen by 3% year-over-year.This House 2,486-square-foot home southwest of Atlanta, built in 1997 on half an acre. Four bedrooms, 3.5 baths, two-story family room and three-car garageLast sold for: $375,000 (2005)Current price: $229,900

Detroit was hit with a double whammy: Lots of subprime lending and high unemployment (currently 13.3%) as the auto industry tanked. The average sales price of foreclosures is higher than the median home price, indicating that Detroit’s more-expensive neighborhoods got caught in the foreclosure spiral and that there’s likely to be inventory that appeals to upscale buyers. Overall, the median home price fell by 1% over the past year.This House 1,708-square-foot home in Grosse Pointe built in 1946. Three bedrooms, one bath and detached two-car garageLast sold for: $240,000 (2002)Current price: $124,900

The foreclosure rate, much lower than the rest of these cities, continues to fall, aided by an unemployment rate (8.4%) that’s less than the national average. Plus, lenders have repossessed just 13% of foreclosures, the least among the ten metro areas with the most foreclosures. Translation: not a lot of choices for bargain hunters. For example, over the past year, sales in New York’s Long Island counties fell 18%, yet the median home price rose by 1%.This House 2,370-square-foot home in Shirley, N.Y (Long Island), built in 1977 on half an acre. Six bedrooms, two baths and one-car garageLast sold for: $405,000 (2005)Current price: $193,800

Because housing construction and related businesses have been mainstays of the local economy, the housing market’s downturn jacked up the unemployment rate (now 11.8%) and slid the local economy into a steeper recession than in many parts of the U.S. Investors with cash will have plenty of leverage in this still-recovering market. This House 1,284-square-foot home in north Tampa built in 1997. Three bedrooms, two baths, vaulted ceilings and two-car garageLast sold for: $215,000 (2007)Current price: $109,900

But the pace of home sales could slow by the end of the year.
Planning to Sell Your Home in Retirement? Downsize Costs Along With Space